Proof Mountaineer Fans Are The Best 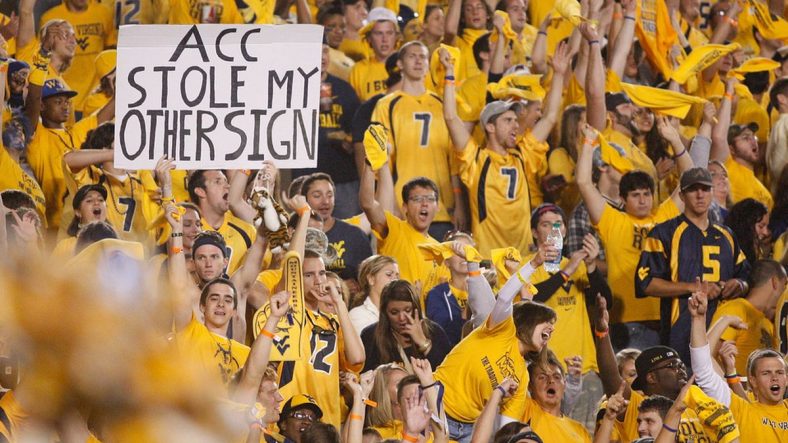 In my professional career I do a lot of social media management. From politics to recreational activities to dieting to my favorite sports teams, I’ve managed Facebook pages that cover a range of topics.

Of all the pages I manage, it just so happens that the one I am the most passionate about is the one that gets the most engagement. Is that because my passion bleeds through to the readers and causes increased engagement? While I thought that may be a possibility, it is highly unlikely.

This was just an observation by me. There was no scientific evidence that the Mountaineer Sports Facebook page was more engaging, it was just by the eye test. Well, now there is scientific evidence that the West Virginia University college football team Facebook page gets more  interactions than any other similar page in the country. By interactions I mean likes, comments and shares. Check it out:

College football team accounts that generated the most Facebook interactions the past month (via @crowdtangle). #smsports pic.twitter.com/Vu08oSvC9e

Now, this is strictly Facebook interaction and doesn’t take other social media platforms into consideration. There are a number of factors that could contribute to this. Maybe West Virginia fans are just geared toward Facebook. The West Virginia football Instagram is ranked No. 12 and Twitter is No. 13. While not as good as the Facebook page, this is still very impressive when you consider all things.

Which college football team accounts generated the most Twitter interactions the past month? #smsports pic.twitter.com/mCJBbhH5eq

Look at  the teams who are ahead of West Virginia. These are all national powerhouses who have mostly had national championships over the last twenty years. The lone exception on Twitter is Iowa who is one spot ahead of West Virginia by one spot on Twitter. Shoutout to the Hawkeyes. They are coming off of a 9-4 season and a victory over Mississippi State in the Outback Bowl.

So what does this say about the Mountaineer fan base? Well, it confirms my suspicions. It’s proof Mountaineer fans are the best. There is more engagement on their Facebook pages than anyone else and they hold their own on Instagram and Twitter.

Here is one example of the dedication of Mountaineer fans on our Facebook page. When Beetle Bolden left the program, we posted an article that was a short tribute to him and showed his Instagram farewell he posted: 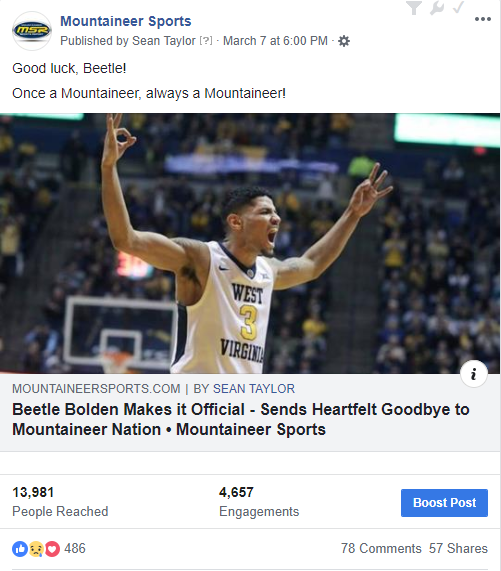 This article reached nearly 14,000 Mountaineer fans and was showered with comments and people wishing the Mountaineer guard farewell. Keep in mind, this is a player who was a backup his first two seasons and was injured for most of the year that he was supposed to have an increased role. It didn’t matter. Mountaineer fans were going out of their way to show Beetle love. I thought this was a great example of the dedication of Mountaineer fans.