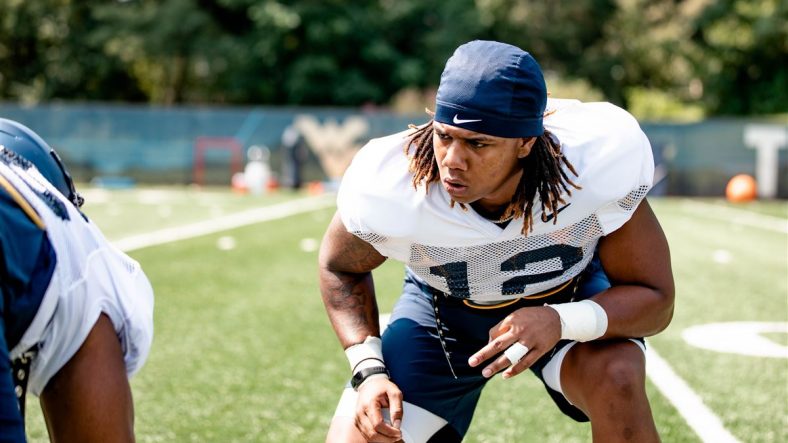 Taijh Alston, an edge rusher who transferred to West Virginia from Copiah-Lincoln Community College after a devastating knee injury in 2017, was injured on a blind-side block by a Missouri defender.  Although there is no official report out yet, he apparently tore tendons in his knee.

Alston, who earned All-Mississippi Association of Community and Junior Colleges first-team honors last year while recording 78 tackles, 7 sacks and 15 tackles for loss last season, had big hopes for his first season with the Mountaineers.  Alston was clearly extremely disappointed with the injury as he was carted off the field, slamming his hands on the cart and throwing his gloves to the field.

Alston’s mom took to Facebook following the game and asked for prayers from Mountaineer Nation, adding, “My son has to have surgery.”  Surgery on his knee will almost certainly end his 2019 season, which is obviously a tremendous disappointment for Alston, his family and Mountaineer fans everywhere.  Alston had an outstanding first game against James Madison in the season opener, contributing a sack.  Prayers for Taijh and his family and hopes for a speedy recovery!

Just saw a post from Taijh Alston’s mom that he needs surgery.. So sad for him ? hope he has a speedy recovery. https://t.co/bOzrIk6vsd