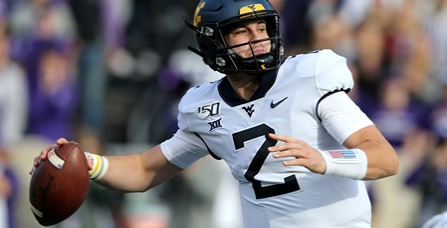 Jarret Doege led the West Virginia Mountaineers to their best win of the season on his very first game as the starting quarterback.  Doege played nearly flawlessly, completing 20/30 passes for 234 yards, 3 touchdowns and 0 interceptions.  The best part is that the Mountaineers beat a tough, 24th-ranked Kansas State team on the road.

Although Doege was faced with poor offensive line play throughout the game and had the usual drops from West Virginia wide receivers, the run game looked much improved and Doege has showed that he is an elite downfield passer, which is something that the Mountaineers have lacked in the first nine games of the season.

Doege’s first touchdown was a perfect dime to Senior George Campbell, who only catches touchdowns.

The very next possession, Doege threw an absolute strike to George Campbell, once again for a touchdown.

His final touchdown was probably his best, as he scrambled away from pressure and threw a bomb to a wide open Bryce Wheaton for the touchdown.

Doege will now likely finish the season as the starting quarterback and still have two more seasons to lead the Mountaineers in 2020 and 2021.  The NCAA now permits redshirt players to compete in up to four games without losing eligibility in the future.  Doege playing in the final two games will help him to get experience with all new playmakers and be crucial to the success of the offense in the future.

However, this season isn’t over and if the Mountaineers can win the final two games against Oklahoma State at home next weekend and TCU in the regular season finale, West Virginia could still be bowl eligible this year.