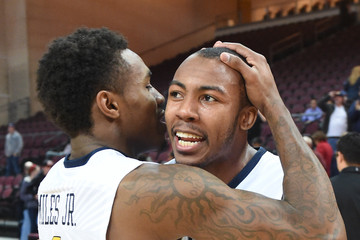 What an incredible run for these two Mountaineer guards. It should come as no surprise that it ended with another win over a ranked team, something these two have done so many times.

Carter and Miles led the way with 21 and 18 points, respectively. Carter added seven assists, three rebounds and three steals. Your typical Jevon Carter stat sheet stuffing performance. Daxter Miles Jr. added four assists and a steal. More importantly Miles was able to get hot from deep. It would be a great time for Dax to get hot from deep as he has had a very down season when it comes to three-point shooting.

If you missed the pre-game celebration of the two, it was something special.

It was an incredible evening. It was very appropriate that the fathers of JC and Dax sat together and took in the night together.

Jevon Carter and Daxter Miles stand at halfcourt and go by the student section after one last time singing Country Roads at the Coliseum pic.twitter.com/33lRmLPFwN

It should come as no surprise that the post-game interviews got emotional.

Daxter Miles gets emotional when reflecting on everything pic.twitter.com/w28uujEecq

Congratulations to JC and Dax on incredible Mountaineer careers. But there’s still a lot of unfinished business. It starts Saturday in Austin and continues into the Big 12 Tournament and NCAA Tournament.

Let’s hope JC and Dax go out with a bang and create West Virginia basketball history.