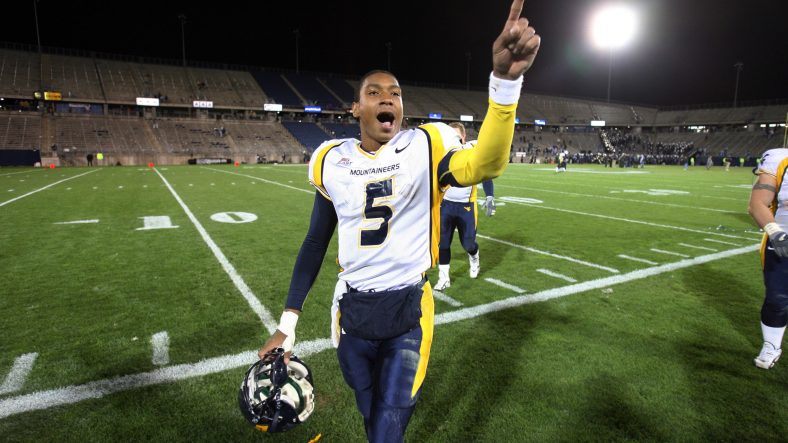 Let me preface this by saying that Pat White is my absolute favorite player on any team in any era ever.  His resume at West Virginia University is unparalleled and winning four bowl games as a starting quarterback may never happen again.  Pat White is truly one of a kind and he absolutely deserves to have his number retired very, very soon.

Major Harris is as big of a name in Morgantown as there is.  He’s a living legend, a moment in time, a part of all of our lives.  I’ve likely watched his 1989 highlights on videotape thousands of times.  I remember what Renaldo Turnbull, Garrett Ford, Eugene Napoleon, Rico Tyler and several other teammates of his said about him as a player and teammate.  In a town that lives and breathes football, he was it.

If you haven’t watched this video before, watch it now.  If you’ve watched it a thousand times, watch it for the 1,001st time.  It’ll be the best 5 minutes and 14 seconds of your day.

He finished 5th in Heisman voting his Sophomore year, 3rd his Junior year and would have been the favorite to win it if he came back for his Senior year.  WVU would have also likely won the National Championship if he didn’t get hurt early in a 34-21 loss to Notre Dame.

Although he was inducted into the College Football Hall of Fame in 2009 and the WVU Sports Hall of Fame in 1999, it’s disheartening to realize that a whole younger generation of Mountaineer fans will not realize how amazing he was and how much he did for the West Virginia football program.  It’s a no-brainer that his #9 jersey should immediately be retired.  There is a stipulation within the WVU Athletic Department that requires a student athlete to have played all four years of their eligibility to be considered.

With all due respect to Ira Rodgers, Sam Huff and Bruce Bosley, who have had their numbers retired by WVU, Major Harris meant more West Virginia football than all three of them.  The stipulation should be waived and his number should be painted on the walls beside Rodgers, Huff and Bosley, who also deserve the honor.

Harris now lives a quiet life in Pittsburgh, far removed from the spotlight he once shined in.  As one of the most spectacular, important players in West Virginia football history, Major Harris should be honored and celebrated by the University that he meant so much to.  While WVU should absolutely retire Pat White’s #5, they should retire #9 to honor the man who did it first.