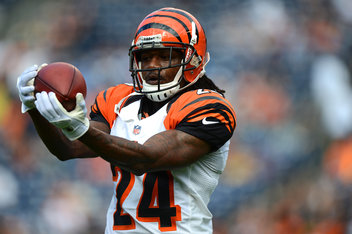 That is one way to make sure the Mountaineers score a touchdown!
Check it out:

Of Geno Smith’s many disappointments, his effort while Adam Jones returned an interception 60 yards for a touchdown early in the fourth quarter of Cincinnati’s 49-9 romp punctuated the rookie quarterback’s bad Sunday.

“I made a late throw to the sideline,” he said about the errant pass. “They always tell you, ‘Don’t be late to the sideline.’ The guy made a good break on the ball and was able to grab it.

“I should’ve made the tackle, but I shouldn’t have forced it in there in the first place.”

Running Out of Time
Coaches Teleconference: Finding a Winning Formula