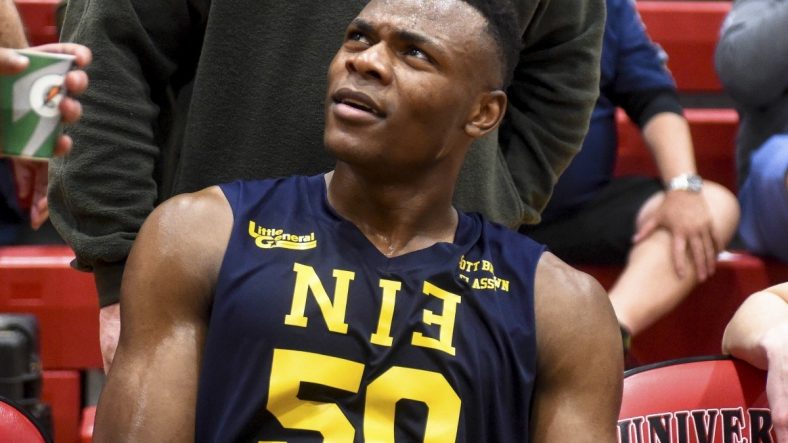 Oscar Tshiebwe bringing it for the PA All Stars April 27 at PBC Roundball at Montour. One of the most decorated players in Pa High school hoops history! WVU fans hope to see you there! Pa All Stars vs. USA All stars at 8 pm Sat @MitchVingle @WVUhoops @PghSportsNow @BobGreenburg pic.twitter.com/9EMPQmhs5q

Oscar Tshiebwe missed the PBC Roundball Classic on April 27 in Montour, PA.  He was scheduled to play for the Pennsylvania All Stars, which was comprised of the most elite talent in the state, against the USA All Stars.  However, Tshiebwe, the 5 star West Virginia commit, did not show up and did not offer an explanation for his absence.

The Pennsylvania All Stars struggled without Tshiebwe, losing 125-92.  Pitt recruit Justin Champagnie, who scored 14 points, was the MVP for the USA team.  The real story, particularly for West Virginia fans, was Tshiebwe’s absence.  All messages from Mountaineer Sports to Tshiebwe following the game went unanswered.  According to TribSSN, “Oscar Tshiebwe of PIAA champion Kennedy Christian was a no-show for the event, and no reason was given for his absence by some of the event organizers.”

The only explanation that has been revealed was a Tweet from Keith Barnes, a freelance high school sports writer for Pittsburgh Now, where he seems to clear up the situation a bit:

Kennedy Catholic senior and @WVUhoops recruit Oscar Tshiebwe is a no-show for the #PBCRoundball at Montour.
Tshiebwe missed the event because of an apparent (non-serious) ankle injury.@PGVarsityXtra @PGSportsNow

Perhaps he tweaked his ankle, perhaps his schedule was packed with high school graduation and preparing for his move to Morgantown, or maybe his body is simply run down after a long season and traveling all around the country playing in various all-star games like the McDonald’s All-American Game in Atlanta, the Nike Hoops Summit in Oregon and the Scott Brown Little General Classic in Morgantown.

Stay tuned to Mountaineer Sports for more information when it becomes available.