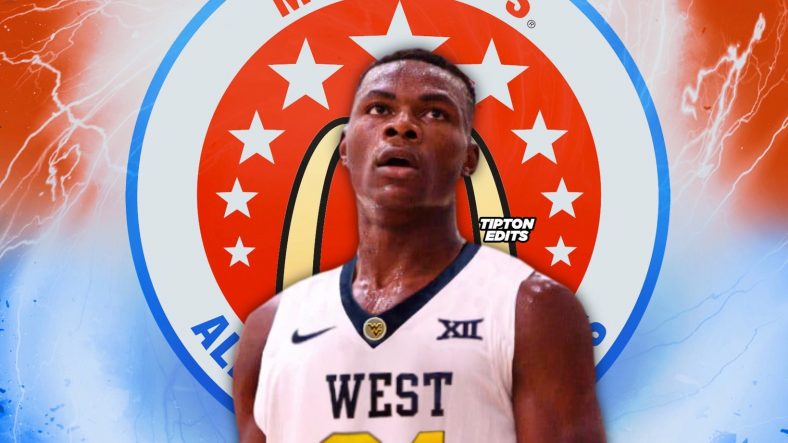 Now that WVU’s season has ended, it’s officially time to look to the future.  The future of West Virginia Basketball is very bright and there’s no brighter spot on next year’s team than McDonald’s All-American Oscar Tshiebwe.  Like, you better put on shades because you won’t be able to see and could potentially do damage to your eyes from the intense illumination of WVU and Oscar Tshiebwe’s future.  Tshiebwe, a 5 star recruit and recent Pennsylvania state champion with Kennedy Catholic, will participate in tomorrow’s McDonald’s All-American game, the first WVU basketball commit to do so since Chris Brooks in 1986.

247 Sports had high praise for the future Mountaineer, including him on the list of prospects that have stood out after the first of two open practices this past weekend in Atlanta:  “Hardest-playing kid on the court for the west squad, Tshiebwe used his motor and athleticism to dominate the glass and effortlessly score around the basket. Tshiebwe rebounded on both sides of the court, consistently out-battling his peers in the paint. Given Tshiebwe’s size, strength, motor and toughness, he is also a versatile defender. He’s a terrific fit for Bob Huggins at West Virginia.”

Tshiebwe also participated in the Slam Dunk event over the weekend and finished 7th out of 8 prospects.  He’s more of a power-finisher than a showy, trick-shot dunker.  Here’s his best dunk of the day, which he received a 74 out of 80 on:

Was just having fun with my friends https://t.co/qsjTralTDk

The game will be played Wednesday, March 27 at 7PM.  It will be televised on ESPN2.  Tshiebwe is on the West team and will play alongside Memphis committ James Wiseman, the consensus top center in the 2019 class.