Oscar Tshiebwe and Miles McBride Are Anxious to Get to Morgantown 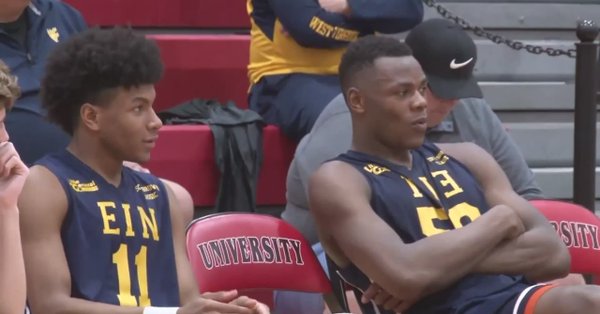 Oscar Tshiebwe and Miles McBride are coming to Morgantown as one of the most decorated duos in recent years. The Mountaineer fans aren’t the only ones fired up about their arrival. The two can’t wait to get on campus and get to practice.

Recently McBride and Tshiebwe were in town for the Scott Brown Classic at University High in Morgantown. This was the first time these two were able to team up and Mountaineer fans should be happy it won’t be the last. The two combined for 55 points and led their team to a win. Tshiebwe had 35 points and 17 boards while McBride added 20 points.

Oscar Tshiebwe (@Oscartshiebwe34) and Miles McBride (@deucemcb11) shared the floor for the first time today, and it was impressive.

Reminder: These two guys are gonna be @WVUhoops teammates next season. ? pic.twitter.com/eDKug66RXt

What was even more impressive about the duo was what they had to say about getting started at WVU. When asked what he’s looking forward to most, McBride said, “Bob Huggins’ practices.”

As a follow up he was asked why. His answer:

“I hear the treadmill’s a great place to be.”

COMING UP: @WVUhoops commit Miles McBride (@deucemcb11) says he can't wait to start playing alongside another top recruit — and playing for one of the nation's winningest coaches.

More from McBride at 11 in tonight's WV Illustrated report. pic.twitter.com/e1kEzq7rHe

For Tshiebwe, despite his graduation coming May 7, he plans to get to Morgantown sooner than that.

“I’m taking a couple of days off and coming here,” the Kennedy Catholic star said.

Tshiebwe took notice of how the Mountaineers struggled early in the season before coming on late. He even has a solution for it. Getting to campus sooner.

“I’m coming up here to help the team,” Tshiebwe explained. “I’m not going to be a distraction. I’ll stay focused. They played good. They need somebody who brings energy and works hard. That’s me.”

It looks like these two young men are not only talented on the court, but have the right attitude to go along with it. This kind of mentality was sorely missing with the players that moved along from the program, but it looks like Bob Huggins has a solid core in place and has a team ready to make huge strides in the upcoming season.