OPINION: Dana Holgorsen Will Be Out of Job Before Next Season 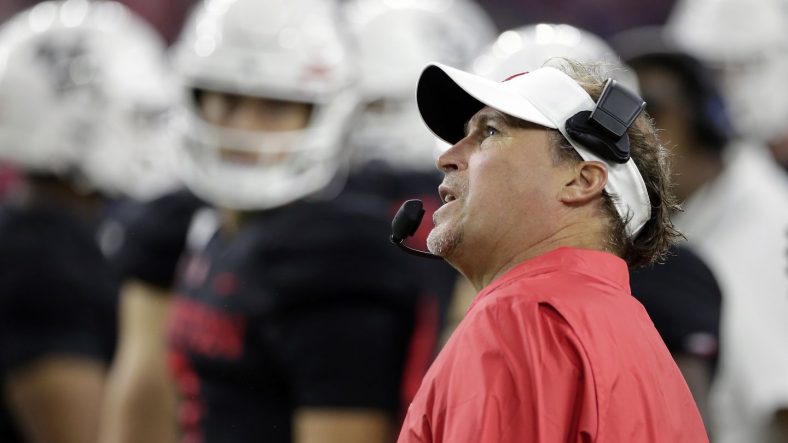 The Houston Cougars football team is in crisis.  After most recently losing to Cincinnati 38-23, the Cougars are now 2-4 and they have severely underachieved in Dana Holgorsen’s first season as Head Coach.

Underachieving in Year One of a Head Coach’s regime won’t get anyone fired, but playing so poorly with such big expectations coupled with multiple embarrassing public issues within the program will.

After an incredibly poor start to the season, Holgorsen, in an unprecedented move in college football, asked several of his key players to redshirt this season and return for one more season, essentially abandoning all hopes for the current season.  Holgorsen is attempting to take advantage of college football’s 4 game redshirt rule that will allow a player to play in up to four games without losing a year of eligibility.

Starting quarterback and Heisman hopeful D’Eriq King decided to take Holgorsen’s advice and redshirted following Houston’s fourth game of the season, saying, “I came here to play football for the University of Houston and that’s not changing.  After carefully thinking through this process with my family and Coach Holgorsen, I have decided the opportunity to redshirt this season gives me the best chance to develop as a player, earn my degree and set me up for the best success in the future.  I’m looking forward to being a part of the success of this program going forward.”

Houston QB D’Eriq King is confident he made the right decision to redshirt the remainder of the 2019 season. https://t.co/yj4Xp1DRFA pic.twitter.com/NstYKkVivd

More recently, Justin Murphy, a (former) offensive guard for the Houston Cougars, claimed to be suspended from the team by Holgorsen for “being a distraction and not committed to the team.”  Murphy went on to claim that Holgorsen “actively tanked” and gave up on this season.

My name is Justin Murphy. And according to sources I am no longer apart of the 2019 Houston Cougar Football Senior Class. A senior class that is the first group to experience a head coach and administration to actively tank a football season. (THREAD)

While Murphy’s blunt language is shocking, how could Holgorsen deny that he did in fact “tank” this season in order to be better prepared for next season?  Tanking a season after 4 games in college football is completely unheard of and Holgorsen blatantly and openly gave up on not only this season but the players on his team.

This, of course, was met with harsh criticism from many people but particularly those who were most affected by it, like Justin Murphy, who was a Redshirt Senior playing major college football for the last time in his life.  Holgorsen’s selfishness negatively impacted many people but players like Murphy in particular.

The University of Houston has big expectations and they want to win now.  Not only will Holgorsen lead Houston to its first losing season since 2012, he has also embarrassed the university over and over again.  While leaving West Virginia for his “home” in Houston seemed like a perfect situation for Holgorsen, it will likely end in a disastrous way at the end of this season.