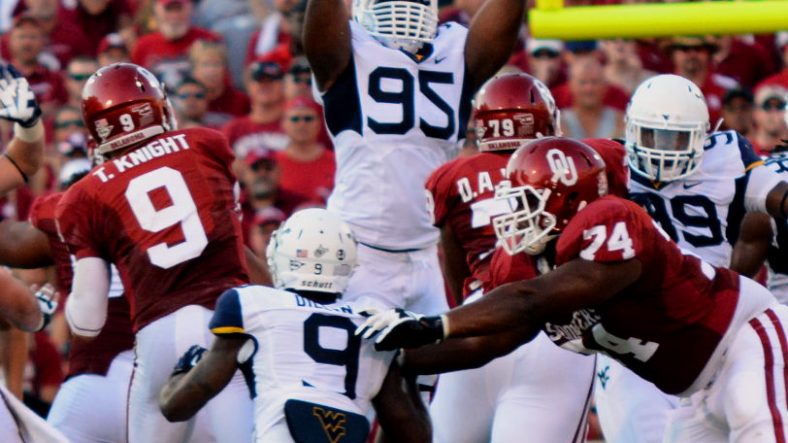 Sluggish is certainly a good word for the game.
Check it out:

Nobody could catch. Nobody could throw. Nobody could hang onto the pigskin when running in or near the red zone. One coach couldn’t keep at least one of his timeouts for the fourth quarter, partly because his staff did not advise him well at all on replay challenges. On Saturday night, a Big 12 game was contested, but this is not the Big 12 we’ve come to expect over the past few years. Points? Completed passes? No defense? That was so 2012 for West Virginia and Oklahoma, who produced a 50-49 barnburner last autumn in Morgantown. This game felt over when Oklahoma scored its 16th point with just over 10 minutes to go… and led by nine. The game truly seemed to be done with over 6:40 to go, when West Virginia – out of timeouts, remember – failed on fourth down near midfield.

This was one long and very strange trip through a bizarro-world environment in which Landry Jones and Geno Smith could not intervene. Oklahoma’s defense played well, but had West Virginia not dropped a well-thrown touchdown pass in the third quarter… or fumbled in OU’s red zone, also in the third… the Mountaineers, despite a disorganized and substandard offense, still could have won this game.