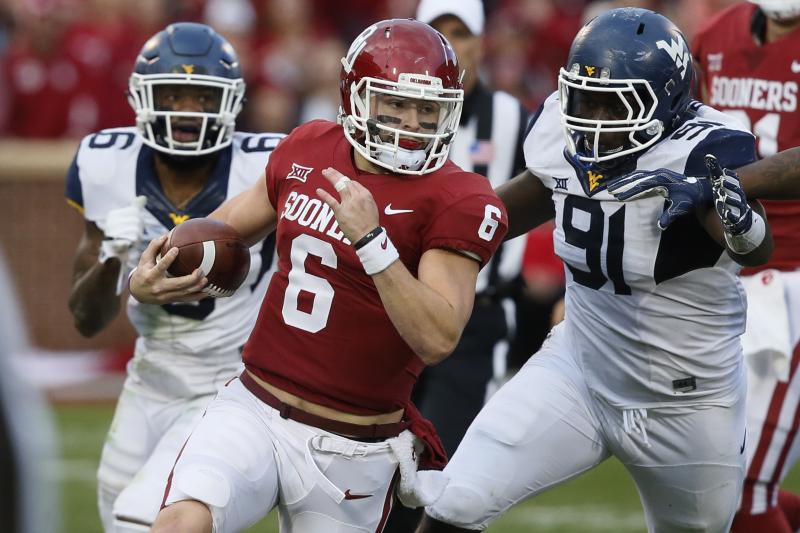 With a College Football Playoff invite hanging in the balance, there was little chance of WVU being overlooked. Oklahoma teabags West Virginia again and shows just how far apart these teams are.

After six straight losses to the Sooners, this one may have been the most hopeless of all of them. Each matchup between the two seems to show these teams are even further apart than the previous one did.

“They obviously had their way with us,” Dana Holgorsen said.

This was the second highest QB rating for Baker Mayfield in all 46 of his starts as a Sooner at 279.4 He had a 282.7 rating against UTEP in September.

Opposing fans can’t stand Mayfield, but there’s no denying his skills on the field. He’s an incredible quarterback and nobody knows that better than Mayfield himself. Holgorsen summed up the thoughts of many: “No. 6 is the best player in college football.”

This was the third time Holgorsen faced Mayfield. The average margin of defeat was over 25 points. The WVU coach emphasized that there is more to Mayfield than you see on video.

“His confidence just oozes out of him. The fiery, spirited kid that he is, when he scores he gets 100,000 people going, much less the 100 kids on the sideline.”

That said, Mayfield’s graduation is probably not going to do much in the way of elevating West Virginia past Oklahoma. Need evidence? Oklahoma averaged more than 10 yards per snap on the plays Mayfield was not in the game. The Sooners will simply re-load and be ready to crush the Mountaineers again next season.

Last year was no different, despite being at Mountaineer Field. Before they knew what hit them the packed house was looking at a 34-7 deficit and shocked into silence. This year in Norman it was 45-10 going into the half. Not exactly progress.

The Sooners took care of business on their way to a 47th conference title.

Much like previous seasons, West Virginia offered very little resistance to the Sooners