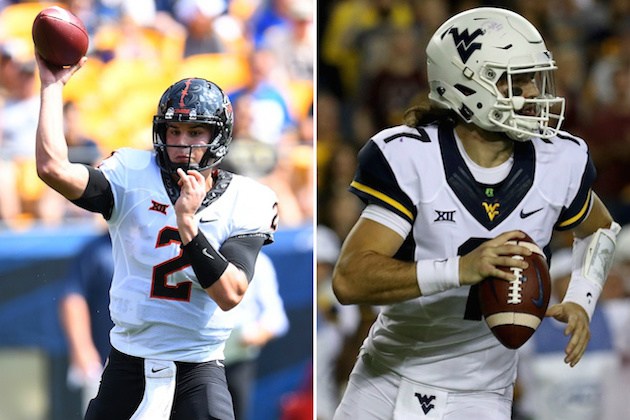 The next three weeks will go a long way in shaping the Big 12 standings. Oklahoma State at West Virginia is big-time game of ranked Big 12 contenders.

Both teams are trying to avoid having two teams ahead of them in the standings that they have a head-to-head loss against. Both teams have already lost to TCU. WVU lost on the road by a score of 31-24. Oklahoma State lost to TCU at home by a final score of 44-31. The Cowboys are attempting to win Big 12 games on the road back-to-back for the first time since 2013. The Mountaineers are looking for a big win over a highly ranked opponent to improve the outlook for the rest of the season.

Oklahoma State: Offensive issues are not something Oklahoma State is used to dealing with. In Week 8 Texas was able to shut down the big plays of the Pokes. James Washington was virtually shut out, held to four catches for 32 yards and no touchdowns. There was only one big play by Oklahoma State which was a 66 yard pass to Marcel Ateman. Even this big play only resulted in a miss field goal. Red zone struggles were key against Texas as the Cowboys only had one touchdown in five red zone trips.

WVU: This will be the fourth game for the Mountaineers against a ranked team. So far their record is 1-2. The only win over a ranked team was against a Texas Tech team that is no longer ranked and very unlikely to be ranked the rest of the season. That said, the two Mountaineer losses against ranked teams were by identical scores of 31-24. In both games WVU had a chance to tie or take the lead late.

The win over Texas Tech ended a streak of 9 straight losses for Dana Holgorsen against ranked teams. You have to go back to 2014 to find WVU’s last victor over a ranked team. It was over No. 4 Baylor. The point being made is that it has been a long time since WVU has landed a signature victory that moves the meter. A victory over Oklahoma State would provide that.

Next Saturday's game against Oklahoma State will be televised on @ABC at noon. pic.twitter.com/P8KC98PKdw

WVU is +7.5 at home. This is a very high point spread for a team between two teams who appear to be very evenly matched. Both teams have a stud quarterback and great offense. So far this year the Mountaineers are 1-1 against the spread as an underdog. Look for Grier and company to keep the Mountaineers close enough to cover the spread in a contest where points certainly will not be at a premium. The pick is West Virginia +7.5.