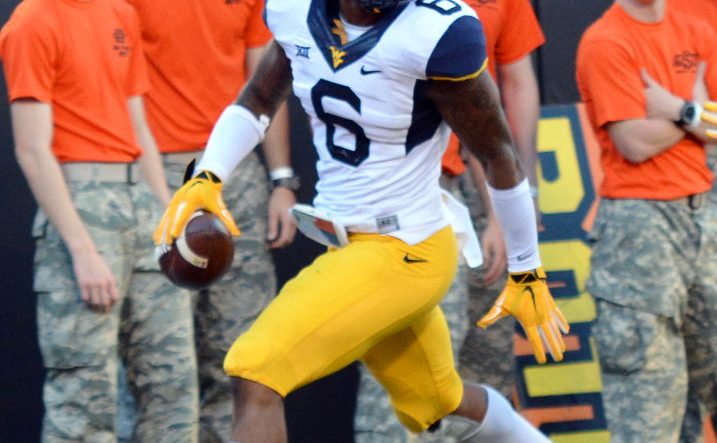 It’s no longer just a piece of Halloween candy- it’s also a cheer heard from the stands in support of West Virginia’s newest defensive star. True freshman safety Dravon Henry led the Mountaineers to a 34-10 victory over Oklahoma State this past Saturday. Henry had two interceptions on the day, including a 52 yard return for a touchdown to seal the game with 4 minutes to go in the 4th quarter.

Considered the jewel of West Virginia’s 2014 recruiting class, Henry was a 4 star recruit out of Aliquippa, PA. He enrolled at WVU for the first summer semester, knowing he would have the chance to earn significant playing time once the season started. Sure enough, Henry was anointed the starter at the free safety position for the season opener against Alabama, and he has held on to the position ever since. Head coach Dana Holgorsen has been pleased with Henry’s play to date.

“He’s been getting better and better,” Holgorsen said. “You worry about that with freshmen. Are they going to hit a wall and digress and get worse and all that? I thought he was headed there about week five, week six. I thought he was kind of starting to dip. He refocused and has started to incline and has been doing better the last two weeks. I thought he had his best game against Baylor prior to Oklahoma State, and we thought this was his game as well… The more that he understands the defense and is in the right position, he can let his instincts take over. That’s where he is getting at this point.”

With Saturday’s victory, the Mountaineers improve their record to 6-2 on the season and 4-1 in Big 12 play. They have earned a #20 ranking in the first ever official College Football Playoff Rankings, released on Tuesday.

The next opponent on the schedule is the #7 ranked TCU Horned Frogs. TCU comes to Mountaineer Field with a 6-1 record after destroying Texas Tech 82-27 on Saturday. The game kicks off at 3:30 and will be televised locally on ABC. Additionally, ESPN’s College GameDay will be coming to Morgantown to broadcast their show from the Mountainlair plaza for the second time ever. GameDay last came to town for the matchup against LSU in 2011.