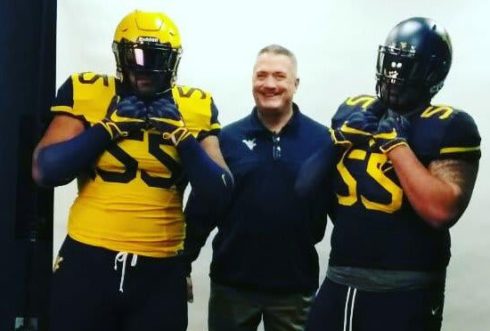 Michael Brown is a 6-foot-3, 340-pound guard. He is expected to step in and challenge for playing time right away.

Joining Joe in Morgantown is his brother Michael Brown (@Iam_MikeBrown), also an offensive lineman out of Eastern Arizona College!

Even better, this was a two-for. How often do you get to land two 340-pound offensive linemen in one trip? Ask Dana Holgorsen. Michael’s brother, Joe, is 6-foot-4 and also 340 pounds and also plays guard. He is also expected to step right in and challenge for playing time. Joe played at the University of Miami under Al Golden. He started three games as a redshirt freshman.

We would like to welcome offensive lineman Joe Brown (@iam_joebrown) out of Eastern Arizona College!

It’s been an interesting journey getting to WVU for Joe. After spending time at Miami, Joe Brown transferred to BYU but ended up at Eastern Arizona Community College with his brother.

Going into National Signing Day, the Mountianeers were definitely looking to add talent in their interior line. With the exit of Kyle Bosch and Grant Lingafelter, the coaching staff was looking to add players who are ready to step in and contribute right away. That is what the Browns are projected to be.

Initially it looked like Mike was headed to Kansas, but he flipped to West Virginia according to a report from Allan Taylor.