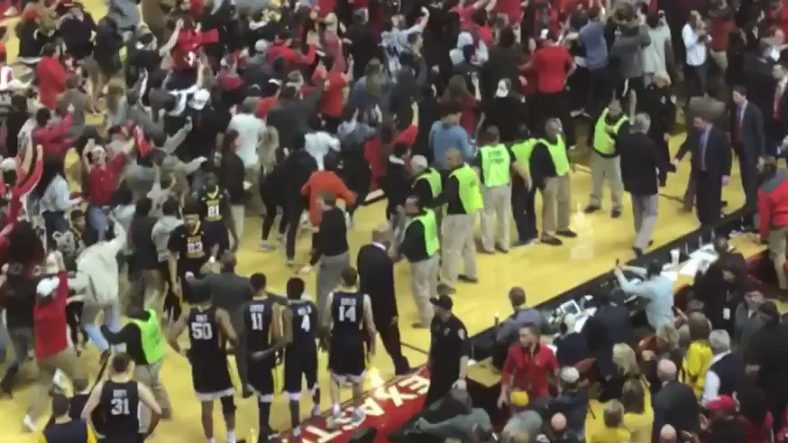 Immediately after Texas Tech’s win over No. 2 West Virginia their fans stormed the court. One of the fans brushed the back of Wesley Harris and he turned around and went after the fan.

There is video showing Wesley Harris throwing a punch at a Texas Tech fan who bumped into him. Two other Mountaineer players, who appear to be Sagaba Konate and D’Angelo Hunter, got into a shoving match with some Texas Tech fans.

I guess Wesley Harris #21 and @sagaba50 #50 from @WVUhoops were a little bitter after tonight’s loss to @TexasTechMBB Swinging at fans on the court ? @Big12Conference @espn #wreckem #gunsup #ttu #wvu pic.twitter.com/cpTdNolmVX

Apparently the Mountaineer players weren’t happy with the decision to storm the court after No. 8 Texas Tech knocked off the Mountaineers in Lubbock.

Here is another angle of it:

Great win! Watch the WV player throw a punch and hit a student rushing the floor. Another reason not to rush the floor when you are 8th in the nation. #wreckem pic.twitter.com/ML6WX2ZVed

The Mountaineers take on the Kansas Jayhawks on Big Monday. It will be interesting to see if there is any discipline handed out before then.