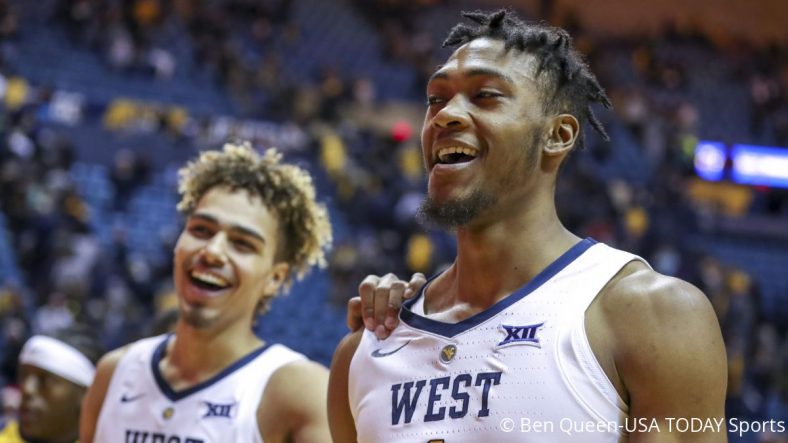 Bob Huggins’ demeanor is a complete 180 from last season.  His team is working hard, his players are listening to him and they have already bonded during practices for their trip to Spain.  Typically overseas trips give teams an opportunity to bond, to get to know one another better, but Huggins feels that his team is already one unit without any cliques or groups within the team.

“This group is as close as we’ve had in a while.  These guys like each other and hang out together.”  Huggins added, “Generally trips give players an opportunity to talk to each other because they don’t have anyone else to talk to.  This group already has bonded and doesn’t need the team chemistry building aspect as much as other teams might.”

The Mountaineers will leave for Spain on Saturday and have one final practice before flying to Spain, where they will play very talented, experienced teams.  They will open up on August 6 against Madrid All Stars, Valencia Basketball Academy on August 9 and Barcelona All Stars on August 11.   Coach Huggins believes that ultimately the game experience will be what helps West Virginia improve and grow the most.

“We got a lot of guys that haven’t played at this level. They’re talented enough to play at this level but haven’t experienced it yet.  I think this will give them an idea of how hard you’ve got to play and how you can’t take plays off.”  Huggins is speaking specifically about newcomers Oscar Tshiebwe, Miles McBride, Sean McNeil and Tajzmel “Taz” Sherman, who are extremely talented players that will really benefit from playing experienced teams in Spain.  Tshiebwe and McBride have played top talent in high school while Sherman and McNeil have played in the JUCO ranks, but the players and teams they will play in Spain will be an entirely different, more advanced level for them.

In addition to the vital game experience for the team’s young, inexperienced players, West Virginia will also get plenty of extra practice time while in Spain.  This time working together will be invaluable for young players that have grown close off the court but could always use extra time gelling as a team on the court.  This will also be a rare opportunity for West Virginia fans to see the team come together before the season starts.

All games will be broadcasted live on FloHoops.com.   The monthly membership is $29.99 for one device, or you can get a family membership for $44.99.  Having an opportunity to see West Virginia’s new players play against some of the best players Spain has to offer will be tremendously exciting and well worth the price of the monthly membership.

Bob Huggins is excited about his players and the future of his team.  One question that Huggins didn’t seem particularly thrilled to discuss was when he was asked about JUCO transfer Ethan Richardson.  Huggins replied that there is news regarding the 6’10 power forward out of Fresno City College but he couldn’t discuss it.

When West Virginia plays Spain at the beginning of next month, they will be a completely different team, loaded with new blood and a new sense of purpose.  Despite not having Richardson for the trip, it appears that Taz Sherman will be ready to travel with the team and the memories of the miserable season that West Virginia hoops had last year will quickly fade when the new team comes together.