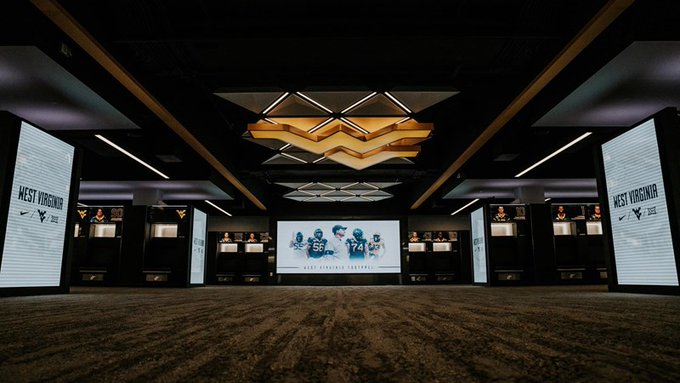 The new WVU football locker room is a big hit amooing the players on the roster. It is approximately 11,125 square feet, compared to previously being 5,625.

The upgrades are more than just in size. There are new mud room and recovery areas as well as an improved players lounge and equipment storage areas.

“There hasn’t been a whole lot for the players to be really excited about lately, and so much credit goes to the people that made it happen,” Coach Neal Brown said, per WVUSports.com. “Starting with March Westin, the construction firm, those guys worked through a pandemic in a safe manner. They showed a lot of dedication and a lot of pride because there were a lot of true Mountaineers working not only on that locker room, but we still have a players lounge and some other things that are still getting completed.”

“The guys love the lockers,” Brown continued. “They’re spacious. They’ve got their own chargers, their own plugs, their hometown and their picture up above them and the music and video boards throughout are impressive.”

There are even six lockers for former Mountaineers players who are in the NFL and come back to Morgantown to work out in the offseason.

We got a locker for you. Come see us!

These are the things that need to be taken care of to get to the next level. It’s great to see and Mountaineer fans are ready to see Coach Brown guide his team to the second-year leap he had at his previous stops in Troy.