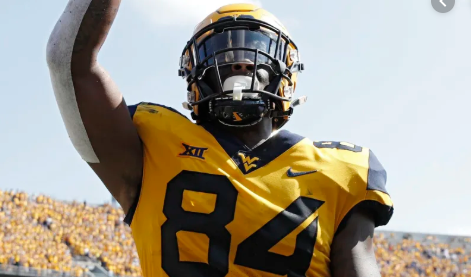 Jovani Haskins has all the talent in the world and can be West Virginia football’s breakout star this season.  Haskins, who was charged last month with three misdemeanors including reckless driving, fleeing from an officer and driving on the left side of the road, will make his first career start for the Mountaineers at Missouri on Saturday.

Haskins has the size, speed and athleticism to be the most important player in Neal Brown’s offense.  Haskins, who stands 6’5 and weighs 245 pounds, is a weapon.  Very few players in college football have the natural ability and God-given talent that he possesses.

Haskins, originally from Bergenfield, New Jersey, transferred from the University of Miami after redshirting there his Freshman year.  He sat out a year due to NCAA requirements and then backed up Trevon Wesco, current New York Jets player, last year.  Haskins finished with 16 catches, 148 yards and a touchdown in 12 games in a reserve/shared role behind Wesco.  Wesco was outstanding for the Mountaineers last season; Haskins can be even greater this season.

Neal Brown loved what he saw from Haskins during Summer practices: “Jovani Haskins is ready to take the next step and be a go-to guy.  He’s had a great offseason and has all the skills you’re looking for at that position.”

Haskins is focusing on being a more complete player, who can not only catch the ball but also help out in the run game and in pass protection.  According to Travis Trickett, WVU’s Tight Ends/Inside Receivers Coach, “That’s what we want to recruit here, and that’s what we want to develop.  It’s a great offense for those guys. They can be involved in the run game, the pass game and the pass protection game. The more complete you are the better it helps us because it allows us to do more.”

Haskins is a complete tight end, but ultimately he will be a primary target for Austin Kendall this season.  He’s big, strong and has outstanding hands.

WVU’s single season record for receptions is held by Stedman Bailey with 114 receptions and 1,622 yards in 2012.  Although it’s unlikely that Haskins will approach those numbers, particularly since he missed the first game, he will certainly be among the best Big 12 targets and will be have one of the best seasons ever for a tight end for the Mountaineers.