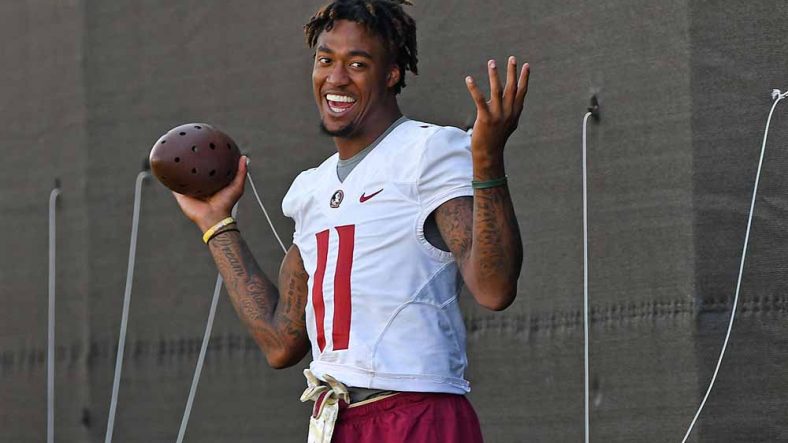 Neal Brown sounded very excited today about one player in particular.  George Campbell, 6’4 200 pound former 5 star recruit from Tarpon Springs, Florida, is different level talented.  WVU rarely sees this kind of talent in Morgantown.  Campbell ran a sub 4.4 40 in high school.  He has the size, strength, speed and skill to be a prototypical wide receiver not only in college but also in the NFL.

He’s not only talented, he’s hungry.  The fact that he’s only caught 13 passes for 206 total yards during his 3 year career in Tallahassee playing for Florida State is not lost on him.  He’s well aware that he has massively underachieved and has a lot to prove.  A hungry, healthy George Campbell with a chip on his shoulder and with something to prove can be an absolute monster.

George Campbell has not fallen off. He is still the very same insanely gifted athlete that he was out of high school, only now he’s hungrier and more experienced.   Campbell’s injuries are well known.  After playing mostly on special teams during his Freshman year, he was injured and redshirted his Sophomore year and then played only in 4 games when he suffered complications from his previous year’s surgery on his hip. Last year he played in 7 games and with one start while still trying to come back from injury.  Now, he’s healthy and ready to live up to his hype.

Despite his injuries, Campbell was a leader for the Seminoles.  In an interview with the Tallahassee Democrat, Florida State wide receivers coach David Kelly said,  “When you talk about George Campbell, I  start smiling.  George Campbell is a tremendous individual who’s going to be extremely successful in life after football. He has that personality, he has that attitude, he has that work ethic, he has that intellectual ability.”

After losing Marcus Simms and Dillion Spalding to the Transfer Portal, West Virginia has a bevy of talented (and unproven) wide receivers this year.  Sean Ryan, the ultra-skilled transfer from Temple, joins a corps featuring TJ Simmons, the former Alabama transfer, Tevin Bush and young players Bryce Wheaton, Sam James and Randy Fields.  Campbell will not only compete to be the #1 wide receiver next season, he will be an outstanding mentor for players like Wheaton, James and Fields.

This is a perfect situation for Campbell and Campbell is a perfect fit at WVU.  His freakish athletic ability and outstanding attitude will be a welcomed addition to Coach Neal Brown’s 2019-2020 team.  He’s home and he’s ready.