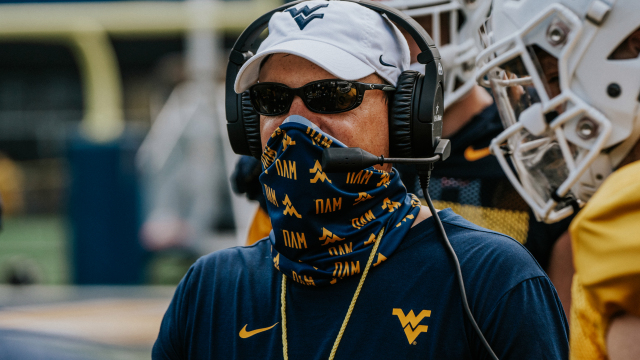 The 2020 college football season, much like everything else in 2020, presents unique challenges for the coaches and players. During the Big 12 teleconference WVU head coach Neal Brown said his coaching staff had to seasons: adapt or die.

“We feel like we’ve adapted. Whether it’s COVID protocols, whether it’s practice requirements, whether it’s how we’ve gone about conditioning, any of those things that have been fluid, I think we’ve been able to change,” Brown said, per WBOY. “I really believe your players feed directly off the staff, and if the staff is able to handle things, whether it’s adversity or change, then I think your players handle it, so we’ve tried to set the standard for that.”

Adding additional pressure to the season opener is the fact that Marshall literally blew WVU’s opponent for the opener off the field. The Thundering Herd took a 38-0 lead into the half and ended up defeating Eastern Kentucky 59-0.

Obviously you can’t compare the final score of West Virginia and Marshall against Eastern Kentucky and find out who the better team is, but if the Mountaineers have a close game against the Colonels, our good friends from the southern part of the state will certainly let us know about it.

It’s game week and Mountaineers fans everywhere are excited to see the results of the work Neal Brown and his team have put in to get ready for this crazy college football season. Kickoff is set for noon and the game will be televised by FS1.