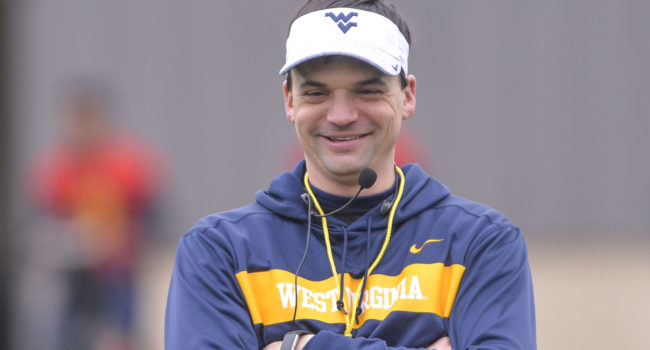 Missouri lost their opener to Wyoming by a final score of 37-31. When you look at several statistics from the game, it looks like the Tigers dominated. Kelly Bryant threw for 423 yards and a couple touchdowns. They had 114 yards rushing as a team. Not great, but good enough. Missouri had one glaring weakness in their game against Wyoming and West Virginia head coach Neal Brown knows it:

The Missouri Tigers defense was absolutely thrashed by the rushing attack of the Wyoming freaking Cowboys.

Wyoming only had 92 yards passing for the game, but were still able to put up 37 points. How? They had 297 yards on the ground and averaged 7.1 yards per carry. Wyoming dominated Missouri

by pounding the rock.

It should be noted that WVU had a disastrous effort on the ground against James Madison. You know who realizes this? Neal Brown. He’s already made mention of it and is working toward a solution so he can exploit this suspect Missouri rushing defense.

Brown refused to pin the blame on one group specifically. At the same time he held everyone accountable.

Coach Neal Brown could waste time making excuses about why West Virginia was unable to get the ground game rolling against James Madison. “Their d-line is a lot better than people realize.” “This is a new system for these guys and they need more reps.” Brown said nothing like that and is instead back in the lab working on correcting what went wrong against the Dukes.

Despite the lack of rushing success against James Madison, the Mountaineers still have the necessary tools to get the ground game going in a big way. You may have heard about the four talented backs the Mountaineers have. Then there are the two Mountaineer offensive lineman who were named to the Outland Trophy Watch List.

The two keys to pulling off in the upset are:

Look for a much improved rushing attack for WVU in their second game of the season against Missouri.