Neal Brown Gives His Thoughts on ‘Horns Down’ 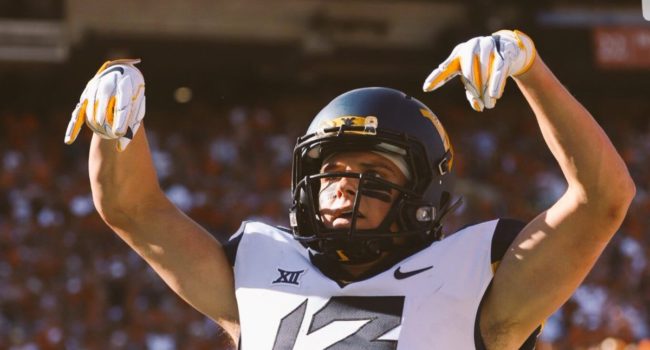 Well, it’s officially Texas week. If you follow any of the WVU football groups on social media then you know the “Horns Down” is all the rage among Mountaineer fans.

Back in 2012 Geno Smith flashed the “Horns Down” while leading the Mountaineers to a victory over the Longhorns. That upset Mack Brown, who was the Texas coach at the time.

“The horns down is disrespectful,” Brown said at the time. “We ought to talk about that as a league.”

Another signature “Horns Down” moment came when Will Grier took the two-point conversion in and flashed the sign after sealing a Mountaineer win in Austin.

WILL GRIER. 2-POINT CONVERSION WITH THE GAME ON THE LINE.

This man's got ice in his veins, y'all. pic.twitter.com/CQikTxeA8J

Of course Tom Herman was triggered by it. West Virginia received penalties every time they did it. In the end it all worked out as the Mountaineers were still able to secure the victory.

In the build up for the West Virginia vs Texas, head coach Neal Brown was asked for his thoughts on the “Horns Down” symbol. His response was right on the money:

Neal Brown: The "Horns Down" thing is "much ado about nothing."

Adds that @WVUfootball has respected all its opponents this season, and hasn't discussed the hand gesture with his players.

Just one example of how much things have changed since the new regime took over the WVU football program.