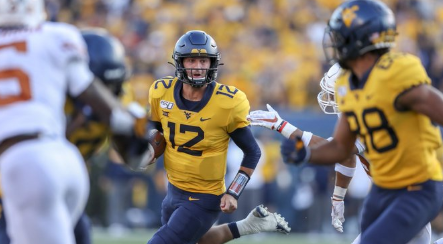 Neal Brown, following West Virginia’s 42-31 loss to Texas, supported his quarterback Austin Kendall, saying, “That’s the best game he’s played, without watching the tape.  The first interception he threw was his fault, he read the wrong guy.   The next three, two of them were in the receivers’ hands and the third one we had a guy run the wrong route.  I thought he did some really good things.”

Brown hasn’t had the luxury of being able to sit down and watch the film, but I have and it wasn’t Kendall’s best game of the season by a mile and I think Brown will recognize that after studying the tape.

Kendall’s first interception in the 1st quarter was a really bad read.  He had TJ Simmons wide open on a post route and instead chose to fit it into three defenders and Ayodele Adeoye made him pay.  With the Mountaineers up 7-0 with the ball and their home crowd very much in the game, this was not the time to make this play and I’m sure Kendall would want this one back.  100% Kendall’s fault.

The second interception came at the 11:03 mark in the 3rd quarter with the Mountaineers trailing 21-14.  Kendall slightly underthrew Sam James and D’Shawn Jamison made a tremendous play to steal the ball from James.  If Kendall put a bit more on the throw, this would have been a beautiful pass, but ultimately it was Jamison’s outstanding defense that caused this interception.  50% Kendall’s fault.

With the Mountaineers trailing 21-17, the third interception took place on 3rd and 1 with the ball on their own 17 yard line.  Brown said that the ball hit the hands of the receiver (Sean Ryan), but watching it closely it was a 50/50 ball at best and B.J. Foster picked it off.  This was a huge turning point in the game.  Rather than being down only 4 points and driving, West Virginia gave Texas the ball on their own 17 and this led to a touchdown, which made the score 28-17.  50% Kendall’s fault.

Down 28-17 with 12:25 left in the game and the Mountaineers still very much alive, Kendall threw another interception to D’Shawn Jamison.  Brown claimed that the receiver (George Campbell) ran the wrong route, but again, this appeared to be a simple out route that Kendall made a poor decision on.  Kendall had either JoVanni Haskins or TJ Simmons open on shorter crossing routes but he forced it to Campbell.  100% Kendall’s fault.

While there was a lot that went into West Virginia’s disappointing loss to Texas, Kendall certainly played a big part in the loss and despite Coach Brown’s initial opinion that it was his best performance this year, I think he will reconsider that after watching the tape.