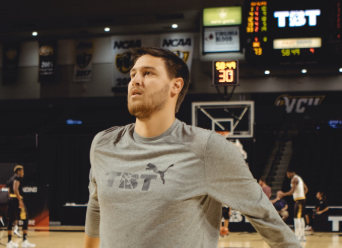 Nathan Adrian, fresh off playing with Best Virginia in The Basketball Tournament, has reportedly received offers to play basketball professionally overseas.  Adrian, a 6’9 forward out of Morgantown, averaged 10.6 points, 6.4 rebounds and 3.2 assists per game as a Senior for the Mountaineers during the 2016-2017 season on the 28-9 team that advanced to the Sweet 16 round of the NCAA Tournament.

Since graduating from WVU, Adrian has worked as an insurance agent at Allstate and more recently has worked as a color commentator for West Virginia basketball games and has also contributed on local podcasts.

Although Adrian has not decided on which offer he will accept, the hometown hero and fan favorite appears to be well on his way to a professional basketball career.