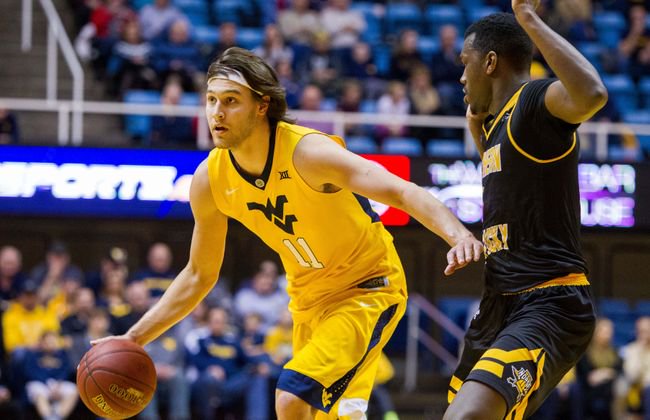 Hometown hero Nate Adrian has turned the page since leading the Mountaineers to two Sweet 16s. Now he’s carving out his niche professionally.

Nate Adrian’s college career was about as storybook as it gets. He led the Mountaineers to the Sweet 16 two times. Was a key cog who improved every season playing for Bob Huggins. Oh and he just so happens to hail from Morgantown.

Since then he has traded in his trademark long hair for more of a clean-cut look at he now sells insurance in Westover.

Now Saturday he is moving on to something new. He is going to join Rob King and Warren Baker as a color commentator for the TV broadcast of West Virginia versus Wheeling Jesuit.

“I never thought about this being something I wanted to do,” noted Adrian of his new opportunity. “But when they approached me, I thought it would be something that would be fun. Why not try it?”

Food Drive and postgame autographs this Saturday at the Coliseum! Details: https://t.co/M63qsW7itx pic.twitter.com/SXehlZUKRy

It wasn’t until just a couple weeks ago that Adrian learned about the opportunity. A WVU official reached out to him by text and asked him if he would be interested. Now he’s a part of the team.

“I hope to bring a little different perspective since I’ve played for Huggs and know the system and how things are run,” Adrian said. “I’m looking forward to it.”

Nate was the ultimate competitor as a Mountaineer. His role increased every year and he was an indispensable part of the Sweet 16 run where the Mountaineers lost a close one to eventual national runner-up Gonzaga. He averaged 9.6 points and 6.0 rebounds for a team that that went 28-9.

He’s excited about the new opportunity. But not too excited.

“I’m think it should be fun. It’s not something I’ve ever done, but I’m not nervous about it … at least not yet,” Nate laughed.

There will be no shortage of Mountaineer fans who will be happy to see and hear Nate Adrian.