My Investigation into the WVU/Pitt Officiating 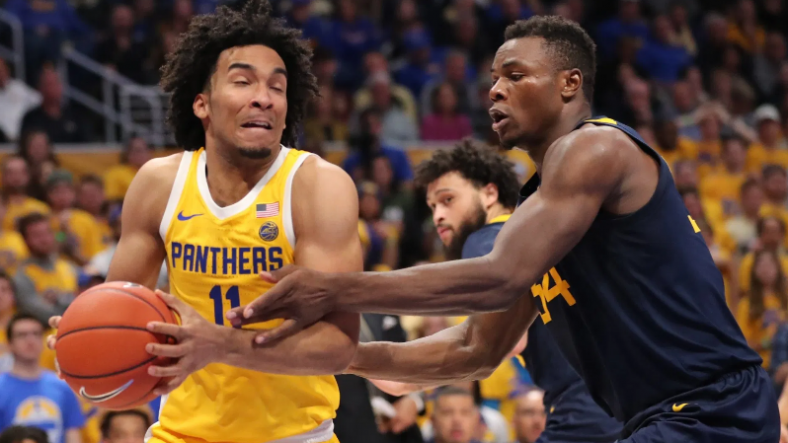 Poor officiating is an excuse that has been used for decades to justify losses for teams, but what if a team wins convincingly and still feels cheated by the officials?

Friday night’s “Backyard Brawl Basketball Edition” featuring the West Virginia Mountaineers and the Pitt Panthers was so poorly officiated, so obscenely miscalled, that I have launched a full-scale investigation into it.  This game went way beyond a few bad calls here and there, it was an absolute travesty and I would be remiss if I didn’t dig deeper and ask the questions that must be asked.

West Virginia and Pitt games are always physical and perhaps the referees came into the game with a preconceived idea to clean up the physical play early with constant touch foul calls, but even that is an issue.  Calls should be made based on what an official sees on the court, not what he expects to see.

The three officials for the game who are in question are Bert Smith, James Breeding and John Gaffney.

Bert Smith was involved in a controversial ending to a Kansas and Iowa State game that led to the Big 12 Conference punishing Smith for a call that cost the Cyclones a win against the Jayhawks.

Smith missed what appeared to be an obvious charge on Jayhawk point guard Elijah Johnson in the game’s final seconds and Iowa State was called for a loose ball foul after Johnson’s shot was missed, which allowed Kansas to make two free-throws and send the game into overtime.  Kansas won the game 108-96 in overtime.  The Big 12 Conference released the following statement after the game:

“The Big 12 Conference acknowledges that officiating errors were made at the end of regulation during last night’s Kansas at Iowa State men’s basketball game. The plays have been reviewed and appropriate measures will be taken by the Coordinator of Men’s Basketball Officials to adjust the number of future assignments for the two officials involved in conjunction with conference policies.”

James Breeding has an even more checkered past.  Last year’s Final Four game between the Auburn Tigers and the Virginia Cavaliers came down to one of the most controversial calls in recent NCAA basketball history when Auburn’s Samir Doughty was called for a foul on Virginia’s Kyle Guy’s three-point shot with Auburn up 62-60 and 0 seconds remaining on the clock.  Guy hit all three foul shots and Virginia went on to a National Championship.

Breeding, an insurance agent from Louisville, is not only responsible for one of the most controversial calls in NCAA basketball history, he has a long history of poor decisions.

According to an SI article released following last year’s Final Four, “Breeding officiated a contentious and bizarre Big East tournament semifinal game in which Seton Hall came away with a 81–79 victory over Marquette, but not before nine technical fouls, 49 total fouls, 85 free throws, three ejections and four foul-outs were issued.  At one point, Pirates star Myles Powell earned his second flagrant foul of the night and ended up in the locker room thinking he was ejected before he was brought back onto the court.”

The final referee in the Pitt West Virginia game was John Gaffney, and he may very well be the worst of them.  Gaffney was named one of the “10 Worst Referees in NCAA Men’s Basketball” according to a 2014 study by StatSheet.  According to the story, Gaffney’s “Home Foul Margin” was -2.63 per game in 369 games in five years for a “Net Home Foul Margin” of -972.3.

“Home foul margin” measures how many fewer fouls a referee calls on the home team than the away team, per game.  In other words, Gaffney’s judgement is highly affected by the home court advantage.  According to the study, “There is ample evidence that throughout all sports, home-field advantage manifests itself not through the athletes playing better or worse, but through the referees (unconsciously) favoring the home team, or rather, the home team’s fans. The more fans, the louder they are, and the closer they get to the refs, the more they affect the refs’ calls.”

The West Virginia-Pitt game is a huge game in both team’s season and deserves to be officiated fairly.  In a highly emotional contest, this game was not officiated appropriately or fairly.  West Virginia was called for 27 fouls and Pitt was called for 22, which is not a tremendous differential, but many of Pitt’s fouls were called near the end of the game when the result was already decided.

I will send full video footage to the Big 12 and ACC Conference for review, but a few of the calls that truly stand out are the following:

On another atrocious call, Pitt Sophomore guard Xavier Johnson drove to the basket, tripped over his own two feet and West Virginia guard Brandon Knapper was whistled for the foul.

FOUL!!?? He tripped over his own feet! #WVU pic.twitter.com/ubKSAdD36s

Perhaps the most egregious was a no-call by the officials when Pitt guard Trey McGowens clearly sticks his leg out to intentionally trip West Virginia’s sensational Freshman Oscar Tshiebwe as he hustled down the floor.  In a game where everything was called, how could this call be missed?

I have emailed the Big 12 and ACC Conferences, as well as J.D. Collins (not the former Mountaineer), the NCAA National Coordinator of Men’s Basketball Officiating and I will not stop until I get some answers.  This was not a case of a few bad calls, there are multiple obvious examples of awful officiating that goes way beyond the typical human errors experienced in most basketball games.

West Virginia won the game and the officiating did not change that, but these three officials called one of the worst games I’ve seen in 30+ years of watching college basketball and they will answer for it.