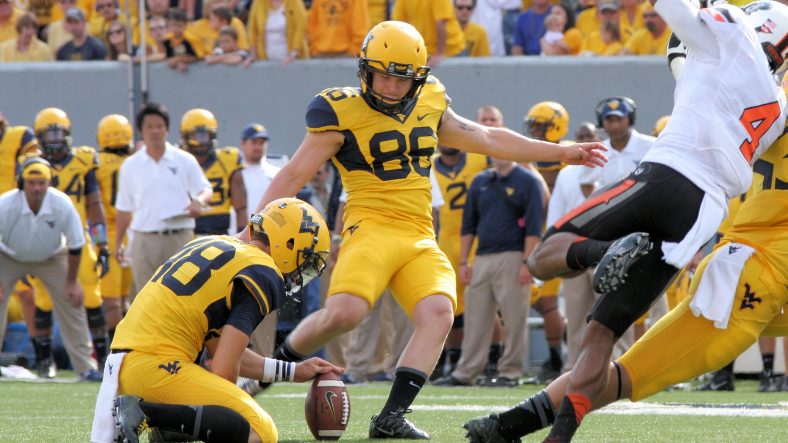 It may be unfair to compare any West Virginia athlete to Jerry West, but sophomore kicker Josh Lambert certainly has a knack for coming through in the clutch. His school record 55 yard field goal as time expired lifted the Mountaineers to a 37-34 win over the Texas Tech Red Raiders. The kick was his second game winner this season, including one against Maryland. He also had one in overtime to defeat TCU on the road last year.

Lambert was named one of the Lou Groza Award stars of the week for his performance. He is also faring well in the national rankings as he leads the nation with 14 total field goals this season and ranks 12th in scoring with 10.7 points per game.

Lambert’s mental toughness was on display in multiple ways during the kick. As if the stress of attempting a long game-winning field goal wasn’t enough, he also had the added pressure of having missed his previous kick, a 47 yard attemptnear the start of the 4th quarter. “I missed one before that, so I just had to concentrate on doing my job and hitting it good,” Lambert said. “As soon as I hit it, I knew it was good. “

Head coach Dana Holgorsen joked after the Maryland game that he hadn’t said a word to Lambert since he stepped foot on campus. “I said the same thing to him before the kick, which was absolutely nothing. I don’t coach him, and coach DeForest is as good as anybody in the country at getting our specialists to be able to have the confidence to be able to go out there and make it.”

On the field after the game, Holgorsen was all smiles, though. He gave Lambert a big hug and congratulated him on the win. For his part, Lambert shared a picture of the moment on Twitter and joked, “He finally talked to me!”

Holgorsen is no doubt aware that he is fortunate to have such a superb kicker on his team. “Obviously I know who Josh is, and he’s not rattled by any situation. He’s going to be a good one for years to come.”

Next on the schedule is the #4 ranked Baylor Bears. They come to Morgantown this Saturday for a noon kickoff. The game is sold out and will be televised on Fox Sports 1.