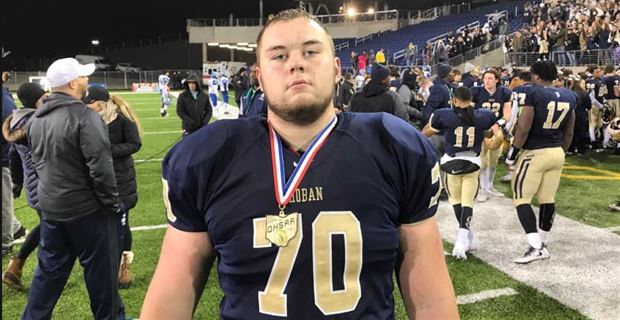 Nolan Rumler has been committed to Michigan since last summer. That hasn’t stopped other teams from pursuing the four-star Michigan commit from Akron Archbishop Hoban. Just last week Clemson came in with an offer. On Monday the West Virginia Mountaineers extended a scholarship.

According to 247Sports, Rumler ranks at the No. 5 offensive guard i his class.

Excited to have received an offer from West Virginia! #countryroads pic.twitter.com/ie6N1rSFQS

Back in December, Alex Williams flipped from West Virginia to Ohio State on signing day. It looks like the Mountaineers are attempting to get some talent to flip from the Big 10 to the Mountaineers.

Who knows if Rumler will end up de-committing and coming to Morgantown, but judging by his tweet he’s pretty excited to get offered a scholarship from West Virginia University.

Also, Jalen Thornton visited Morgantown this past weekend for the Junior Day event. Thornton is a legacy recruit from Cincinnati (OH) Indian Hills. His father, John, was a great player for the Mountaineers. “My family loves them, so I’m not gonna lie – they’re up there for sure. But at the same time, I also have interest in some of the other schools around my home in Cincinnati.”

According to 247Sports, Thornton is the 46th-ranked strong-side defensive end. He has also received offers from Kentucky, Iowa State and Cincinnati among others.

Coach Holgorsen and the rest of the Mountaineer coaching staff continues to work hard to get an early start on the 2019 class.