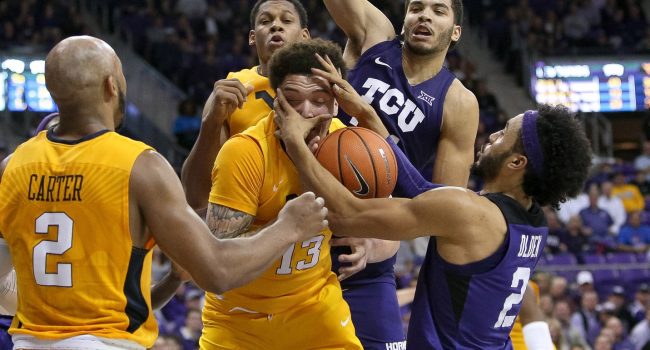 Mountaineers Humbled In Fort Worth

Mountaineers Humbled In Fort Worth

There is a very familiar face on the TCU bench with long-time Pitt coach Jamie Dixon. This was the first win for TCU over a ranked team at home in more than two years. As a result the Horned Frogs fans stormed the court.

“I’m glad they’re happy,” Coach Dixon said. “We’ve lost so many close games. For our guys I’m really excited, but for our fans I think I’ll be even more excited because they deserve this.”

While TCU was able to notch their first win over a ranked Big 12 opponent, WVU lost their third out of four games. Two weeks ago the Mountaineers were ranked No. 2 in the AP Top 25 and are currently No. 7 with a showdown at home against an unranked and angry Kentucky team looming Saturday night.

The story for the Mountaineers was ice cold shooting. After a 35 point win over the Texas Longhorns on Saturday the Mountaineers were hopeful they were back on track. The tough defense of the Horned Frogs made shot making very tough for WVU.

During the stretch when TCU took control of the game the Mountaineers missed 14 straight shots and hit just 2 of 21.

Coach Bob Huggins gave his take on the shooting woes.

“The first half we stopped them seven straight times and we didn’t score,” Bob Huggins said. “It’s not like we didn’t have shots, we just didn’t make them. When you’re wide open I don’t think it’s the defense.”

Senior leader Jevon Carter was able to score a team-high 16 points, but was 0 for 6 from 3-point range. That state sheet stuffer also had seven assists, five steals and six rebounds. Senior Daxter Miles was also ice cold, shooting only 1 of 8 from deep.

Sagaba Konate had another solid night with 14 points, eight boards and four blocks.

Teddy Allen was back from being benched from two games. This wasn’t the Teddy Buckets the fans were hoping to see. He played 12 minutes, scoring seven points and grabbing five rebounds, but shot only 1-of-7.

James Bolden re-injured his groin. The team’s top 3-point shooter percentage-wise ran into a crushing pick in the backcourt and never returned.

On the last play of the half, Beetle Bolden reaggravated his groin injury and is doubtful for the second half.

So far WVU has came up empty in two trips to Texas, losing to TCU last night and then Texas Tech 72-71 on January 13 in Lubbock.

Tonight a Super Tuesday looms in Norman where the hot Kansas Jayhawks are in town to take on the Sooners. The Jayhawks can go a long way to securing their 14th straight Big 12 title as a win would give them a two-game lead over everyone in the conference to go with having a win over West Virginia in Morgantown.

No. 12 OU clashes with No. 5 Kansas on Super Tuesday. Doesn't get much bigger than this. #Commit

Anybody else a little tired of the Trae Young hype train? It seemed like they had more interest in talking about Trae Young than the actual game on the court on Big Monday.

As stated earlier the Mountaineers take on Kentucky Saturday night in a sold out game. The long-time rivalry of Bob Huggins and John Calipari is renewed. Bob Huggins owns an 8-3 record over Calipari during his time at Cincinnati and Kentucky. The two never squared off while Calipari was the coach at UMass.

Count Jay Bilas among those fired up for Saturday night.

WVU vs TCU – Does A WVU Loss Give Kansas Big 12 Title #14 In A Row? VOTE
Super Bowl Bound Eagles Loaded With Mountaineers