Mountaineers Have UNFINISHED BUSINESS Next Season 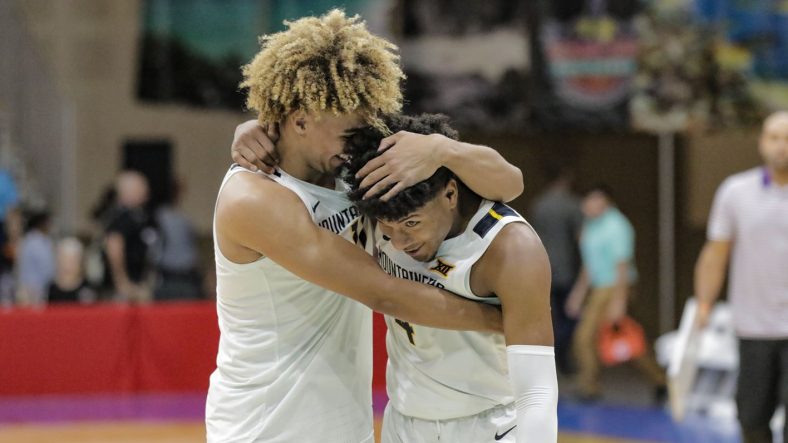 The West Virginia Mountaineers were playing their best basketball of the year before the season was unfortunately cut short prior to the Big 12 and NCAA Tournaments.  Although West Virginia was the youngest, most inexperienced team in the Big 12 Conference this past season, they exceeded expectations and set themselves up to be one of the best returning teams in the conference next season.

Oscar Tshiebwe and Derek Culver are both extraordinarily talented interior players, but both need another year of experience before entering the NBA Draft.  Neither player is listed in any of the mock drafts for this year’s NBA Draft, but both appear in the mock draft on NBADraft.net for the 2021 draft.  Oscar Tshiebwe is currently listed as the #21 pick in the first round to the Philadelphia 76ers and Derek Culver is projected to go #57 to the Boston Celtics in the 2nd round.

With both Tshiebwe and Culver back, the Mountaineers will be one of the biggest, deepest, most talented teams in the Big 12 and perhaps in the nation next season.  The team will gain outstanding JUCO point guard Kedrian Johnson (who will take the place of recent transfer Brandon Knapper), four star players Jalen Bridges (who Huggins said was one of the best players on the team in practice this past season) and Isaiah Cottrell, the 68th ranked player in the 2020 class, as well as Taj Thweatt and the team will likely only lose Logan Routt, Chase Harler and Jermaine Haley to graduation.

Following the announcement that the NCAA Tournament would be canceled this season, Bob Huggins took to Twitter to say the following:  “Deeply saddened the guys won’t get the experience to play in the NCAA Tournament but understand health and safety of those involved comes first.  To the seniors, I’m grateful and appreciate everything you’ve done for the program.  To the others, we have unfinished business.”

They sure do.  The Mountaineers made incredible strides (going from 15-21 in 2018-2019 to 21-10 in 2019-2020), but this is a team that can be one of the most feared teams in the country next season.  While it’s a difficult pill to swallow that West Virginia will not be able to compete in the NCAA Tournament this season, they will be back and better than ever next year.

Deeply saddened the guys won’t get the experience to play in the the NCAA tournament but understand health and safety of those involved comes first. To the seniors, Im grateful and appreciate everything you’ve done for the program. To the others, we have unfinished business.