How Will the Mountaineers Fit With Their New NFL Teams? 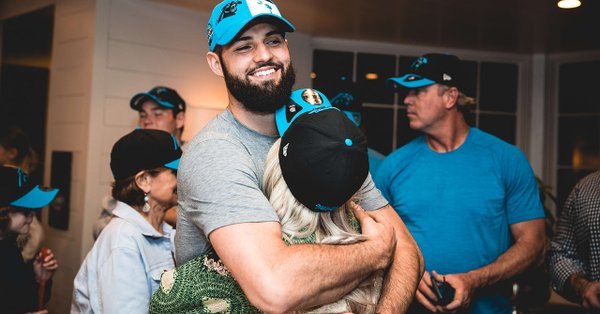 The 2019 NFL Draft has come and gone. Here, from a Mountaineers perspective, is how it played out.

The former WVU tackle went to the defending Super Bowl Champion New England Patriots in the third round (101 overall). Though Cajuste went one spot later than Will Grier, he went to a much more advantageous situation than did his college quarterback. Cajuste joins the Patriots and offensive line coach Dante Scarnecchia, who is legendary in the game. In recent years, there hasn’t been a better sure fire way for offensive linemen to become rich than by becoming former New England Patriots. This off season, Trent Brown turned his time in New England into the richest offensive lineman contract in NFL history. Last year, Nate Solder left the Patriots for a $62 million, four-year deal from the N.Y. Giants. Scarnecchia tutored Brown and Solder, both of marginal pedigree, into free agency bankrolls.

If Cajuste can follow this blueprint, the former Mountaineer tackle will become a wealthy man, likely on a second contract in a city other than Boston.

This was the shocker of the draft from a Morgantown-centric perspective. Sills wasn’t the professional prospect West Virginia partisans seemed to believe (as in, fans who thought he was one of the top receivers in the draft), but Sills failing to get drafted at all wasn’t on anyone’s radar.

With an enviable frame (6-5, 221 pounds) and touchdown-machine production (33 total touchdowns in his final two season), it’s unfathomable that Sills never heard his name called. But here we are.

The road to making a living playing football became much more treacherous than former quarterback phenom expected. Sills signed as an undrafted free agent with the Buffalo Bills. The good news for Sills is he won’t face overwhelming competition in upstate New York. The bad news, obviously, is being undrafted, the Bills have no draft capital tying them to Sills.

Draft played out surprisingly (bad) for: Will Grier

Grier went late in the third round (100 overall). That range was the ballpark expectation for the ex Florida and West Virginia signal caller. It’s his destination that raises eyebrows.

The Charlotte, N.C. Native was selected by his hometown Carolina Panthers. Normally, being drafted by your hometown team is a dream come true. But it’s hard to see how that’s the case here.

Grier goes to the Panthers with the likely expectation of backing up former NFL MVP Cam Newton. Newton is coming off of a shoulder injury and has been inconsistent during his nine years in Carolina. But it’s unlikely the Panthers plan on moving on from 29-year-old Newton. So why draft Grier?

The most plausible scenario is the Panthers are unsure if Newton will be able to start the season because the season because of the injury. It’s even possible, if less likely, that Newton could miss the entire season, ala Andrew Luck, circa 2017.

But, from Grier’s perspective, even if Newton misses the entire 2019 season, where does that leave him, long-term? The team assuredly will go back to Newton as soon as he’s healthy. And, at 29 years old, the Panthers are not likely to change starting quarterbacks for at least the next half-decade.

Which leaves Grier likely playing the entirety of his rookie contract holding a clipboard. It is possible/probable that Grier won’t start an NFL game during the next four seasons.

There were a number of teams Grier could have started for in 2020. The Panthers aren’t one of them.

After the 2018 NFL Draft, Wesco had played all of two college football games. After the 2019 draft, the former WVU tight end heard his name in the fourth round (121 overall) as a pick of the New York Jets.

As a fourth-round selection, the Jets made a solid investment in Wesco. That means that Wesco has almost certainly already made the team. Add that to joining an offense led by Sam Darnold, last year’s third-overall pick, professional football is off to a start Wesco couldn’t have dreamed of 12 months ago.

Draft pick that says the future is now for: Gary Jennings

Jennings was tabbed by the Seattle Seahawks in the fourth round (120 overall). The former Mountaineer pass catcher was the second receiver taken by the Seahawks and one of three taken overall.

The reason for the heavy load of receivers is twofold: First, Seattle and quarterback Russell Wilson recently agreed to a four-year, $140 million extension. The monster payday comes following a season where the Seahawks were the most run-centric team in the league. It’s hard to imagine that Seattle plans on paying Wilson $35 million a year to hand off. Expect the Seahawk passing game to be far more active next season.

Second, part of the reason the Seahawks didn’t pass more last year was their dearth of quality receivers. Their top target, Doug Baldwin, is contemplating retirement. Wilson has money. He needs receivers.

Jennings will be joined by fellow rookie D.K. Metcalf out of Mississippi. Metcalf was a projected first-round target before the draft after a combine that saw him run a 4.3 40-yard dash while carrying a Mr. Universe build. But a lack of college production, coupled with a Tom Brady-level shuttle run, provided evidence of a player who can run straight very fast while looking sexy doing so. But he can’t, you know, produce. Contrarily, Jennings just runs solid routes, had prolific college numbers and can catch the ball. Don’t be surprised when the former Mountaineer outshines his more-hyped teammate as a rookie.

Long was the final pick of the draft hosts, the Tennessee Titans. Going in the sixth round (188 overall), Long had to wonder if, like Rocky Balboa, he should’ve stayed in school.

The biggest knocks on the former WVU linebacker are his size (5-11, 227), and his durability (the two are linked). Dropping into the sixth round doesn’t give Long any security with the Titans. If he’s going to make the team, he’s going to have to earn it.

Long’s likeliest route toward a roster spot will be special teams contribution. If he can make his mark on special teams in camp and preseason, Long can then use the 2019 season as a building block to getting bigger, stronger and more versed in NFL defensive schemes. Unfortunately, Long appears to be a long shot.