Mountaineers Dominated By Utes In Heart Of Dallas Bowl 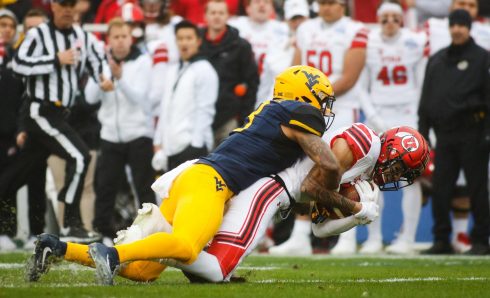 The West Virginia offense failed to show up for the Heart of Dallas Bowl. Mountaineers dominated by Utah after gaining only 153 total yards in a 30-14 loss.

With starting quarterback Will Grier, starting running back Justin Crawford and a pair of offensive linemen all out, the offense was miserable. WVU will head into the offseason with a third straight loss.

Offensive coordinator Jake Spavital talked about some of the issues the Mountaineer offense faced during the loss.

In the postgame interview Coach Dana Holgorsen and Mountaineer players discussed the loss in the Heart of Dallas Bowl.

Sills had zero receptions. He was targeted two times but wasn’t close to catching either pass. White got it done, with three catches for 26 yards and a late touchdown.

Chris Chugunov had a very difficult time getting anything going in the passing attack. He finished 9-of-28 for 129 yards with a touchdown and two picks. He was also sacked twice.

You have to go back to 2003 to find such a dismal offensive performance for the Mountaineers. In 2003 the Mountaineers were only able to gain 156 yards against Maryland.

The win takes Kyle Whittingham to 11-1 in bowl games. Dana Holgorsen dropped to 2-4 and is now on a two-game winning streak.