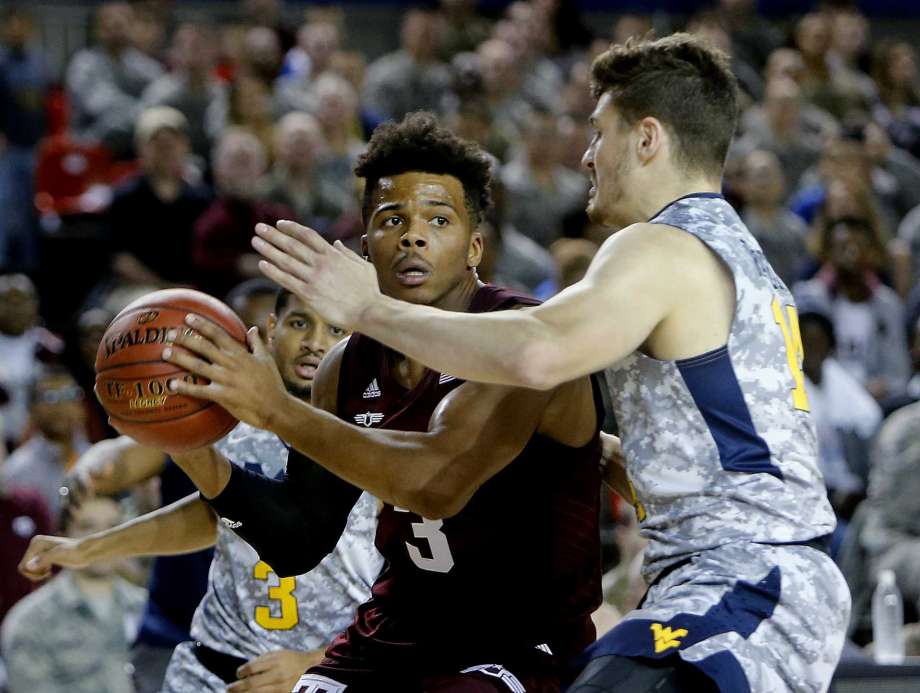 The Mountaineers came out of the gate hot, taking a 23-10 lead in the first half. Then the Aggies responded with a big-time run, outscoring WVU 35-15 and taking a seven point lead into the locker room. The second half was more of the same as the Aggies completely dominated the second half and won by 20 points.

During the first ten minutes of the game it was vintage “Press Virginia,” knocking down threes and forcing turnovers. The camouflage-clad Mountaineers, who were honoring Veterans Day, came out strong but after that not much went right. The Aggies shot 48% from the field, including 53% from three point range.

Texas A&M junior center Tyler Davis controlled the paint. He had 23 points and 13 boards, the second year in a row he had a double-dboule against the Mounties. Junior forward DJ Hogg scored 19 points to go with seven rebounds and six assists. The Aggies also got strong guard play from junior guard Admon Gilder. He finished with 23 points, nine boards and seven dimes.

The Mountaineer bigs had no answer for the Aggies in the paint. Sagaba Konate had four blocked shots, but only six boards and four points. Lamont West netted eight points, but only shot 3 of 11. Wesley Harris was hot from deep early but shot 4 of 12 from deep.

Despite being loaded with experience, the WVU backcourt struggled mightily. Jevon Carter scored 12 points and handed out seven assists, but was 4 of 11 from the field. Daxter Miles was 1 for 6 from the field.

The only thing West Virginia had going for them was the play of sophomore James “Beetle” Bolden, who knocked down five threes off the bench and ended up with 19 points.

WVU was in love with the three ball. 40 of their 70 attempts from the field were from three-point range. Despite shooting just 30% the Mountaineers continued to jack up the threes.

Up next is the home openers against American University at the WVU Coliseum at 7 p.m. on Wednesday. Something tells me Coach Bob Huggins will have some extra work for the boys to put in before Wednesday. Take a shower and wash that one off, boys. It was brutal.