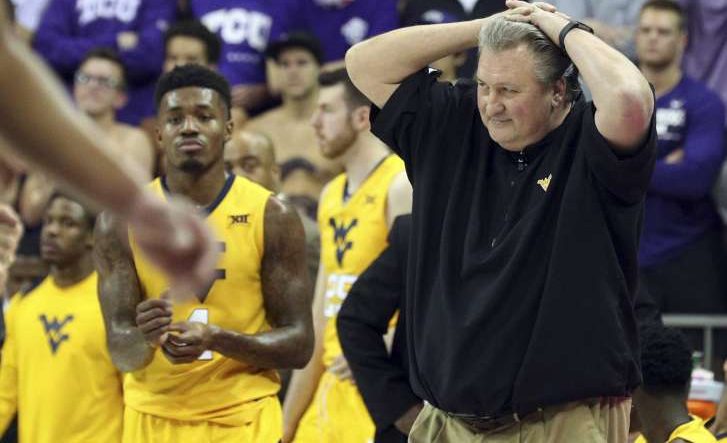 After a brief two-game reprieve, the Mountaineers continue their disastrous second half with a home loss to unranked Oklahoma State.

Earlier this season West Virginia was riding a 15-game winning streak. Times like that can cause a team and their fans to get too high. There was a lot of talk that “this is the year.”

First there was the road loss against Texas Tech. No worries. These kind of losses are bound to happen. Against a top ten team on the road, there is no shame in that. Sure the Mountaineers led by double digits in the second half and didn’t trail in the second half until there was 6:16 left, but these kind of things happen on the road against good teams. No shame in a 72-71 loss in Lubbock.

Next up the Mountaineers suffered a 71-66 home loss to the No. 10 Kansas Jayhawks. Normally there would be no shame in losing to Kansas whether it was at home or on the road, but this was different. The Mountaineers held a 16-point lead in the first half. With under nine minutes to go West Virginia extended their lead to 12 points on a Jevon Carter jumper. That’s when the wheels fell off. West Virginia was outscored 28 to 11 the rest of the way. Is this blowing a lead thing becoming a trend? It sure seems like it. While Kansas is always very talented and a tough out, this was one the Mountaineers should have definitely had.

Up next West Virginia scored their largest margin of victory in a Big 12 game, defeating Texas by a final score of 86-51. It seems things are now back in order and it’s time to go on a roll.

By this point West Virginia has lost three of four. Coaches, players and fans alike are all very concerned. While TCU is a solid team, these are the kind of wins you need to get when you are expecting to contend for the Big 12 title.

Up next Kentucky is in town. So is ESPN College GameDay. This is a great opportunity for West Virginia get back on track in front of a national audience. So what do they do? They collapse in front of a national audience. Kevin Knox scored 34 points and helped Kansas come back from a 17-point deficit in the main event of the Big 12/SEC Challenge. West Virginia was outrebounded 29-13 in the second half. Kentucky went 18 for 18 from the line in the second half, while only committing five turnovers. Kentucky went on a 21-run to take a 58-56 lead. A three-pointer by Beetle Bolden tied it up at 74 with 1:23 left, but that was the shot West Virginia would make from the field, losing by a final score of 83-76.

“They took us out of some things,” Bob Huggins said. “We had some guys who are going to be heroes rather than team players. And the truth of the matter is they are just better than we are. They’re more talented.”

Instead of looking at the dreadful highlights let’s look at awesome “Country Roads” segment ESPN College GameDay put together.

What an open to @CollegeGameDay! pic.twitter.com/Ki0c0MIOZU

From there the Mountaineers had a road game against Iowa State. “Hilton Magic” was alive and well for the last place Cyclones. They handed West Virginia their fifth loss in six games by a final score of 93-77. Iowa State led by ten at the half and this game was never in question. At this point the wheels are falling off of this Mountaineer season.

Kansas State is the next opponent. This game proves that Bob Huggins’ team is nothing if not unpredictable. West Virginia breaks a record they set just weeks earlier for their largest margin of victory in Big 12 conference play. The final score was 89-51. Could it be time to reel off some wins in a row?

Not many things would be more satisfying than handed Trey Young and Co. their first home loss of the year. With the road struggles the Mountaineers have endured in conference play that does not seem very likely. The Mountaineers do the unthinkable and march into Norman and hand the Sooners their first home loss of the season after 14 straight wins. It looks like West Virginia is back on track. Could another win streak be on the horizon? It sure seems like it.

Only it wasn’t. In a season of tough losses, Saturday’s home loss against Oklahoma State has to be one of the toughest. Let’s not take anything away from the Cowboys. Though their record is 15-10, they have wins on the road over Kansas and West Virginia along with a home win over Oklahoma. Sandwiched between the Kansas and West Virginia wins is a home loss to Baylor, so this team is all over the place. That said, this is a game the Mountaineers had to have. Kansas and Oklahoma both lost Saturday, combined with a Texas Tech win, putting the Red Raiders in the driver’s seat for the Big 12 title.

After their current slide what is a reasonable expectation for this Mountaineers team? When West Virginia was No. 2 in the nation the sky was the limit. Final Four? Why not? Now this team is in danger of sliding out of the AP Top 25.

No one knows what is causing the slide. Not even future Hall of Fame Coach Bob Huggins.

One thing is for sure. The Mountaineers have yet another Big Monday lined up against TCU. Your guess what Mountaineer shows up Monday night is as good as mine.