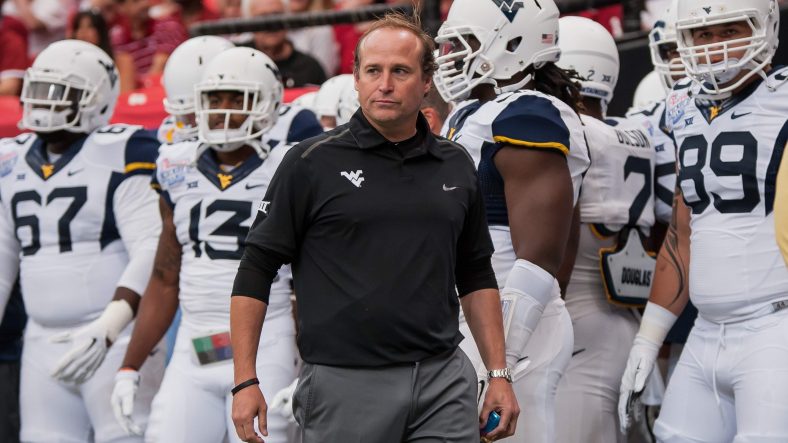 After a tough loss in the opener against Virginia Tech, WVU has pounded two much lesser opponents in East Carolina and Delaware State. Now the Mountaineers charge into Big 12 play and will be playing strictly Big 12 teams the rest of the way.

Sure, the Kansas Jayhawks aren’t going to scare anyone. Not on the football field, anyway. It’s a good way to ease your way into conference road play. In their last visit to Lawrence the Mountaineers hammered the Jayhawks 49-0. Last year in Morgantown WVU defeated Kansas 48-21. Kansas took down Southeast Missouri State in their season opener, but have since been handled by two straight MAC schools. Central Michigan defeated Kansas 45-27 and Ohio defeated 42-30.

Despite being a lesser opponent, it’s the first step for the Mountaineers to take on a path toward a chance to play for the Big 12 Championship on December 2.

“I’m excited about turning the page and moving on to the Big 12 next week,” coach Holgorsen said.

Many of the players are fired up as well.

“We’re going to be facing some very powerful teams and I can’t wait to compete against them,” said wide receiver Gary Jennings Jr.

Marvin Gross Jr., a 5th-year senior, is especially fired up for a shot at a Big 12 championship.

“I know every game is going to be my last game, so I’m trying to put my best foot forward every time,” Gross said.

Even though the Mountaineers piled up some points while defeating Delaware State 59-16, many plays were left on the table. For instance Delaware State scored an 81-yard touchdown pass on a busted coverage. From that point on the defense tightened up and performed much better.

Justin Crawford has started out his senior season on a mission. The senior has three straight 100-yard games. The last WVU running back to do that was Wendell Smallwood in 2015. He was able to get in the endzone three times. That was the first time a Mountaineer running back has scored three touchdowns since Charles Sims made it happen On November 9, 2013 against Texas.

According to Vegas.com, WVU is a three touchdown favorite against Kansas.