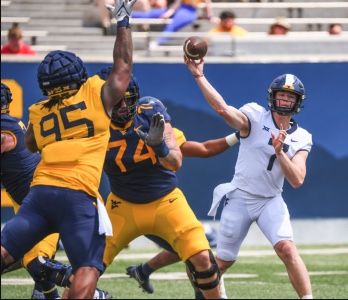 Former Mountaineer quarterback legend, Geno Smith, is setting records in the NFL with the Seattle Seahawks. He owns the longest streak of any quarterback to complete at least 60 percent of his passes while posting a passer rating of 80 or better. Smith accomplished this in 11 straight games this season, which stands as the second longest streak in NFL history.

Only Aaron Rodgers and Peyton Manning have done this in more games, doing it 12 consecutive times. Smith led the Seahawks to a late win by going 70 yards on ten plays with 36 seconds left in the game beating defending Super Bowl champion L.A. Rams 27-23. Smith threw for 367 yards and three TDs in the victory.

In other Mountaineer news WR Reese Smith, QB Goose Crowder, Charles Woods, Mike O’Laughlin and Bin Wahad have inserted their names into the transfer portal. It is a database that allows other schools to contact them regarding a transfer. Just because a player is listed doesn’t mean that they have to transfer. It only means schools can contact them. Hopefully they will reconsider and stay with head coach Neal Brown and the team.

Finally, former WVU basketball player and current Boston Celtics head coach, Joe Mazzulla was named the NBA Eastern Conference Coach of the month. He led the Celtics to an 18-4 start to the season. They are in first place in the Eastern Conference.