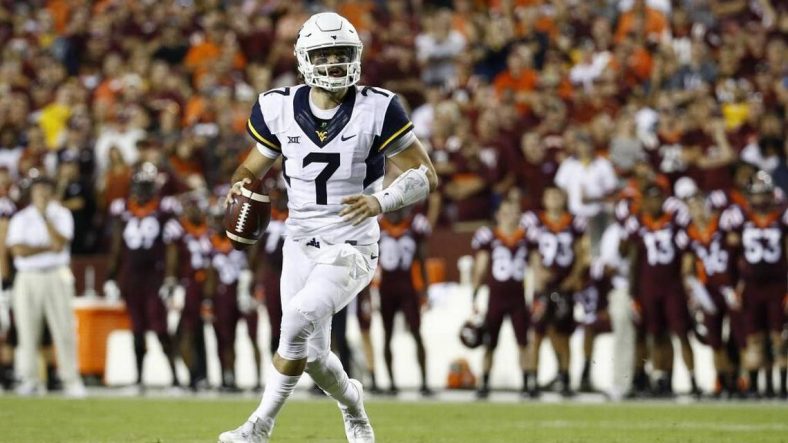 It’s no secret that the Mountaineer defense has had some issues thus far. While that is garnering much of the attention, the Mountaineer offense is operating at a recording-breaking pace through four games.

Sure, the strength of schedule hasn’t been elite outside of Virginia Tech. Don’t forget the Mountaineers piled up serious numbers against the Hokies as well. When you think about the pace of Big 12 football games, the 2017 Mountaineers could be the most productive offensive in WVU history.

The 2012 Mountaineers, led by Geno Smith, Tavon Austin, Stedman Bailey and company, averaged 502 yards per game and piled up 6,506 yards on the season, both of which are school records.

How do the 2017 Mountaineers stack up so far? They are averaging 595 yards per game and are on pace for 7,735 yards which will absolutely shatter the record of the 2012 season. Even if the Mountaineer offense drops off substantially, they would only need to average 458 yards per game to equal the yardage totals for 2012.

The individual records may not be broken at the levels of the 2012 season. A big part of that is Will Grier’s ability to spread the wealth between his receivers. When you combine that with the rushing attack, it makes it difficult for a WVU receiver to catch 25 TDs like Bailey did in 2012. David Sills has 7 TDs so far and with a couple big games he could get to 25.

The schedule is going to get tougher soon, starting off with the showdown with TCU. This prolific WVU offense at least gives the Mountaineers a puncher’s chance when they attempt to outscore their opponents In the meantime Tony Gibson will be doing his best to sort things out on defense and battle through injuries.

If West Virginia can avoid falling into lulls like they have in their first four games, they have the offensive firepower to put teams in holes they can’t climb out of. At the very least the Mountaineers should be able to stay close enough to be within a final scoring drive to win. Grier and company with the ball and a chance to win is something not many Mountaineer fans would turn away.

While the Mountaineers have enough offense to take care of most of their opponents, in order to defeat some of their toughest opponents (like TCU) the defense will need to show up. Regardless of the defensive efforts, if the offense is firing on all cylinders that will keep them in the game. That said, Mountaineer fans are looking for the offense to do more than “keep them in the game.”