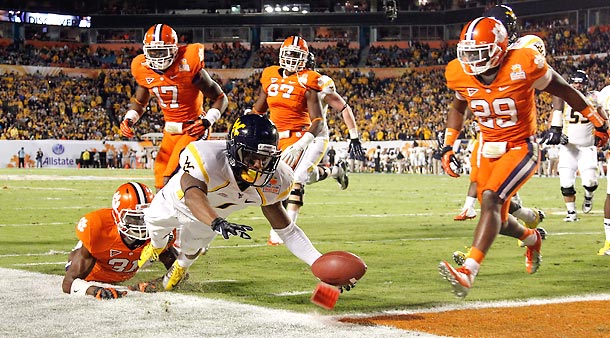 The 2012 Orange Bowl was supposed to be a rout. It was, just not the one everyone expected. When West Virginia faced off against Clemson in Miami no one could’ve predicted what they were about to see.

With future NFL players all over the field on both sides – Geno Smith, Tavon Austin, Stedman Bailey, Sammy Watkins – any college football fan would assume defense would be optional. After all the Mountaineer offense had put 30 point outings in all but two of their games and the Clemson Tigers were no slouches on offense either as they ranked 18th in the country in total yards being led by quarterback Tajh Boyd and the aforementioned Sammy Watkins.

After Clemson took a 17-14 lead at the end of the first quarter in their first major bowl game since 1981, the rest of the game was all WVU. The Mountaineers would score 35 points in the second quarter, an Orange Bowl record, to go up 49-20 going into halftime. The 49 points in a half was also a record as were the 69 total points. The game would never get close as West Virginia went on to win 70-33 in what was one of the most shocking wins in WVU’s history. All in all a total of nine records were broken including Geno Smith’s passing touchdowns, 6, and also total individual touchdowns, 7. Smith also broke some guy named Tom Brady’s Orange Bowl record with 401 passing yards as well. Tavon Austin tied the record with 4 receiving touchdowns in a bowl game becoming the 4th player to do so.

Similar to every other BCS bowl games, West Virginia was never given a chance by the “experts”. Before the game even started people will calling for a landslide in Clemson’s favor. The Mountaineers walked the walk instead of talking the talk.