Mountaineer Memories: WVU Marches into Blacksburg and Takes Down No. 13 Virginia Tech – 2002 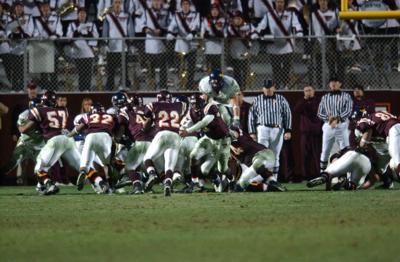 It’s not often that West Virginia and Virginia Tech face off against one another, but whenever they do it is seldom a blowout (think about Will Grier’s first start for WVU). The story was the same on a November Thursday night in 2002. Led by head coach Rich Rodriguez, the unranked Mountaineers were looking to beat a ranked team for the first time in 9 years when they traveled to Blacksburg, a notoriously difficult place to play, to take on the No.13 Hokies.

Running back Quincy Wilson had the best offensive day for West Virginia rushing for 125 yards including a 42 yard, third quarter touchdown run. But it was the defense that save the day for the Mountaineers as linebacker and future soap opera star Grant Wiley made a goal line stand and Brian King had a late game interception to all but seal a 21-18 WVU victory.

Here are the key plays in the game, the Grant Wiley stop and the Brian King interception:

And here is the game in its entirety, provided by the incomparable WVURxMan on YouTube:

This was an incredible win and one of the all-time great WVU road wins. This was during the peak of Beamer Ball on a Thursday night in one of the toughest places to play in the country.