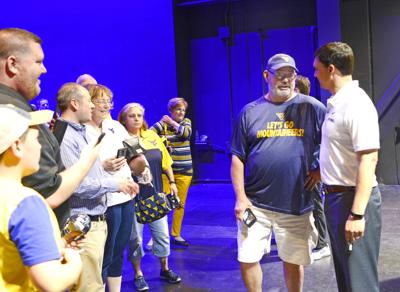 Mountaineer Fan Day is scheduled for Saturday at 10 a.m.  to 11:30 a.m. on the west concourse of Milan Puskar Stadium. The event is free of charge. It’s time to get fired up for the 2019 season and this event is a great way to do just that.

Fans will have the opportunity to get autographs from their favorite players as well as the coaching staff including Neal Brown. The West Gate will be open at 9:50 a.m. and that is where fans should enter.

In an effort to keep things moving quickly, each fan will be able to have one item autographed.

After the autograph session ends fans will be able to watch the Mountaineer football team conduct practice up until 1:30 p.m.

There will also be a 2019 WVU football schedule poster that will be able to be picked up during the autograph session.

Mountaineer fans are excited about the Neal Brown era getting started in Morgantown, so there should be a great turnout for this event. It’s a good opportunity for Mountaineer fans and their families to get out and show support of the team.

It’s August so we are officially in the month of the first Mountaineer game. Let’s go Mountaineers!