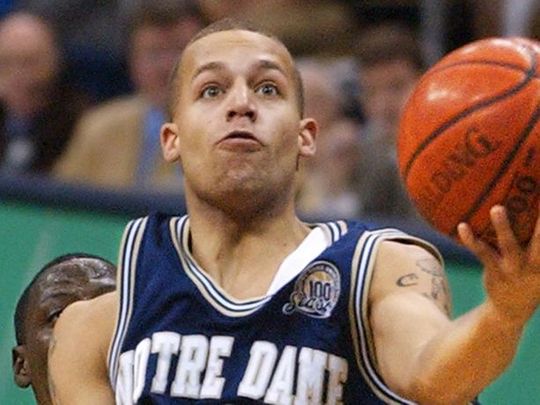 Nearly everyone who was a part of it misses the “Old Big East” when it comes to basketball. Of course, everything is a business and everyone fled for other conferences in pursuit of greener pastures or in West Virginia’s case, survival.

This article is going to be part of a series that focuses on some of the most annoying West Virginia opponents in the Old Big East. These guys could be annoying for a number of reasons: success against West Virginia (number one factor), seeming to  play college basketball for eight years, the way they looked or any other factor that could be deemed annoying.

West Virginia was in the Big East Conference for basketball from the 1995-1996 season through the 2011-2012 season. We will start at the early years and move forward.

Few things can trigger college basketball fans like a fat guard with a long-sleeved t-shirt under his jersey. Khalid El-Amin was just that.

El-Amin played three seasons at UConn and averaged 15.3 points and 4.4 assists per game. More importantly he drove opposing teams and fans crazy with his arrogance and ability to hit the big shot, all while being chubby.

It wasn’t just WVU fans that were driven crazy by El-Amin. He led a loaded UConn team to the national championship game where they defeated Duke. This team included Rip Hamilton, Jake Voskuhl and Kevin Freeman.

Let’s try to focus on the positives. Here is when El-Amin handed a crushing loss to Pitt.

A key part of annoying a collegiate fan base is longevity. Christ Thomas was at Notre Dame for what felt like a lifetime. In actuality he was there from 2001 to 2005. He was the classic player who was not quite good enough to declare for the draft, so he got to drive opposing teams and fans crazy for the full four years.

He was on the All-Big East second and third teams for all four years he was at Notre Dame. He led the Irish to the NCAA Tournament two of the four years while there. Their best year was a 24-10 season that ended in the Sweet 16. So it’s not like he led great teams. But you know what he was great at? Beating WVU. Thomas led Notre Dame to a 7-0 record over the Mountaineers.

Unfortunately (or fortunately) there was no video evidence of Chris Thomas’ domination of WVU to be found on the internet.

Carl Krauser, the pesky Pitt point guard. Whenever he made a basket he threw up his arms in the sign of an “X” to rep the Bronx. Talk about obnoxious. Krauser led an annoyingly good run of Pitt basketball from 2002 to 2006. He actually arrived in Pittsburgh in 2001, but was redshirted.

In his freshman year he led Pitt to a Big East regular season and tournament championship. He led Pitt to a 5-3 record against WVU. These years featured some battles between Pitt and the Pittsnogle and Beilein-led Mountaineers.

Check out some footage of Pittsnogle and the boys taking on Carl Krauser, Chris Taft and Pitt.

That concludes part one of this series. Is there anyone you hope to see on the list moving forward? Let me know in the comments if so.