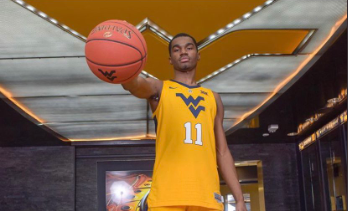 Devan Cambridge, a 6’6 215 pound small forward from Hillcrest Prep in Phoenix, Arizona, is expected to make his commitment announcement sometime today and WVU is at the top of his list.  Cambridge, fresh off an impressive showing at the Peach Jam in Augusta, Georgia, has gained interest from several top schools lately including Auburn, Georgia Tech, Oregon, Vanderbilt, as well as Austin Peay, Brown, Campbell, East Tennessee State, Furman, Miami (Ohio) and Western Kentucky.

Cambridge is a 3 star prospect, but is very much on the rise.  Although a bit raw still, he is an athletic freak.  Brandon Jenkins, the lead writer for Prep Hoops, described Cambridge as “one of the most athletic players I’ve seen at the Peach Jam.  He put on a show and played above the rim with flare.  He also knocked down a couple of threes off the catch and was very fun to watch!”

Devan Cambridge was one of the most athletic players I seen @NikeEYB ?Jam! He put on a show in his match with @ProSkillsEYBL playing above the rim with flare. The three-star wing also knocked down a couple of threes off the catch! He was very fun to watch? @DevanCambridge pic.twitter.com/yveG9FQuqb

With 12 players already under scholarship and NCAA allowing 13, Cambridge will likely be “Lucky 13.”  Coach Bob Huggins made it clear that filling up the roster with 13 scholarship players isn’t necessary.

“I don’t know that we absolutely have to have 13.  If you think about it, like we took Lamont West really late in 2015 and it was for Lamont to continue to grow. He’s a guy who continued to grow physically and as a basketball player.”

Although Huggins doesn’t feel that he needs a 13th scholarship player, Cambridge is the kind of athletically gifted players that would be able to develop like a Lamont West did in the past and be productive next year and in the future.

Cambridge is expected to make his announcement today and Mountaineer Sports will have news on his commitment as soon as it is made!  Stay tuned!