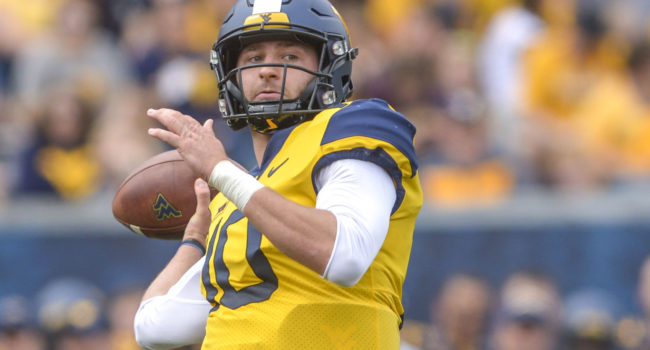 When Austin Kendall announced he was transferring to West Virginia and his eligibility for the 2019 season was confirmed, most assumed he was a slam dunk to be the starter for the upcoming season.

After spring practice things appeared to be wide open. Kendall was dealing with plantar fascitis and no one stood out during the spring workouts. Looking back this could have been a motivational ploy by head coach Neal Brown or maybe it’s just taking time for Kendall to find his groove in Morgantown. Regardless there are now signs that point to Austin Kendall being the quarterback when the season starts against James Madison.

According to most reports, Kendall is getting the most reps with the first team since practice started up last week.

Another thing that’s always interesting to look at are the Vegas odds. They have Austin Kendall as the -350 odds on favorite to win the starting quarterback spot. That means in order to win $100 you need to wager $350. Jack Allison is at +350 and Trey Lowe III is at +550.

So if you have some inside information on who will start at quarterback and it’s not Austin Kendall, it’s a great opportunity to take some money. Also, feel free to help a brother out. It’s always nice to add to the bankroll.

With the way things are shaping up, the Mountaineer offense could be very potent this season. Austin Kendall is a guy who went toe-to-toe with Baker Mayfield and Kyler Murray before losing out on the starting job both times. And despite the mass exodus of wide receivers there are some guys with big-time ability coming back.

Sean Ryan, the 6’4″ transfer from Temple,  is already turning heads at practice. He was able to get on the field at Temple during his freshman year making 12 catches for 162 yards and a score. Thanks to a coaching change at Temple the talented sophomore will be on the field and ready to make a different in the Mountaineer passing game.

Then there’s George Campbell, the former five-star recruit who has transferred to WVU from Florida State. He is incredibly gifted and battled injuries during his time in Tallahassee. Now he’s healthy with a chip on his shoulder and ready to prove a lot of people wrong.

And let’s not forget about the returning players. If T.J. Simmons can avoid drawing players 20 yards out of bounds and drawing a penalty, he proved to be a very effective receiver in his first year at WVU. He had 28 catches for 341 yards and when you consider he was the 4th receiver there is plenty of room for improvement for the talented junior.

Tevin Bush is undersized but is someone Neal Brown will definitely be looking to get in space. Bush showed off his speed against Kansas State when he got behind the defense for a 62-yard touchdown catch.

Then there’s Bryce Wheaton, Sam James and Randy Fields, three redshirt freshmen who are anxious to get on the field and prove their worth. Ali Jennings, part of the class of 2019, is also enrolled and hoping to see some action as a true freshman.

WVU also has a very talented running back core with four guys coming back with legitimate experience. With them running behind a line featuring two guys on the Outland Trophy watch list, including one preseason All-Big 12 lineman, the running game should certainly be a force to be reckoned with.

Colton McKivitz is ready to hold it down on the West Virginia offensive line once more this year. pic.twitter.com/uQtCiJgV7z

The national media does not think much of the WVU football team under first year coach Neal Brown, but the offense definitely has enough talent to make some waves in the Big 12.

That said, Vic Koenning definitely has his work cut out for him with the Mountaineer defense. But this is the Big 12. Who doesn’t struggle on defense?