Could Lincoln Riley Be Heading to Cleveland to Be Reunited With Baker Mayfield? 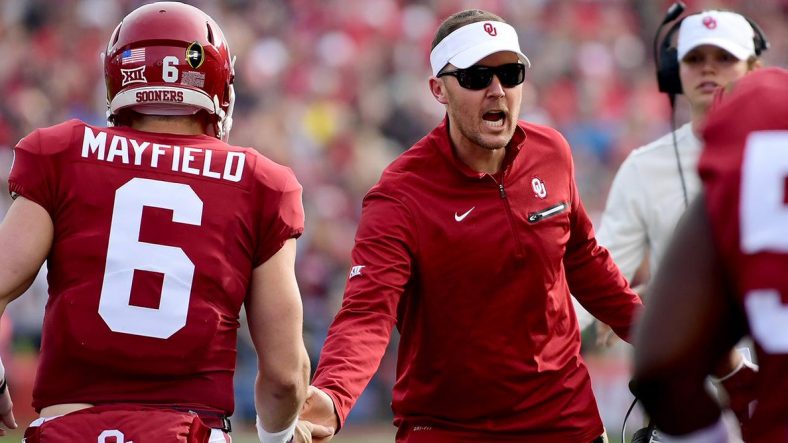 On Monday the Cleveland Browns did something they should have done long ago: fired Hue Jackson. Now that they took care of this, it is a foregone conclusion the Browns are going to turn up the heat when it comes to bringing in Lincoln Riley to be their new head coach.

Lincoln Riley is in just his second season as the Sooners head coach. Last year the Sooners went 12-2 under his watch. So far in the 2018 season, Oklahoma is 7-1 with their lone loss being on the road against Texas, who West Virginia happens to be playing this week. The 35-year-old Riley is 19-3 so far in his tenure and unless things change, he will be the head coach at Oklahoma as long as he wants to be.

If you take a look back to last year, Lincoln Riley was coaching Baker Mayfield to a Rose Bowl appearance. Now, Baker Mayfield is the franchise of the Cleveland Browns. They made him the No. 1 overall pick in the NFL Draft. The Browns front office is desperate to make sure they get the right guy to lead their potential franchise savior. Who better than Mayfield’s college coach to lead him into the 2019 season and into the future?

Riley was asked about this in today’s press conference. He was ready for it and had a great series of canned responses ready.

Riley is currently earnings $4.8 million to coach the Sooners. If he were to take a job in the NFL he’d get at least $6 million. If the Browns decide he is their guy, they could go all-in like the Raiders did with Gruden and offer $10 million a year to coach them. Could the young Sooners coach really turn that down? Is he that committed to the Boomer Sooner movement?

Time will tell, but this is certainly not the last time you will read about the potential Riley-Mayfield reunion in Cleveland. Stay tuned.

And that’s not the only Big 12 coach being questioned about when they will move on. Bill Snyder, who has been coaching the Kansas State Wildcats for a hundreds years, was asked if this will be his last year as their coach. Snyder’s reply?

“I don’t think about it until the season is complete. I’ve answered that question a thousand times the same way.”

There could be some turnover in head coaches in the Big 12 at the end of this season. Time will tell. Look for the heat to be turned up by the Browns at the end of the regular season after the Sooners visit Morgantown. Could a Mountaineer win be big enough of a push to send Riley to Cleveland? Time will tell.