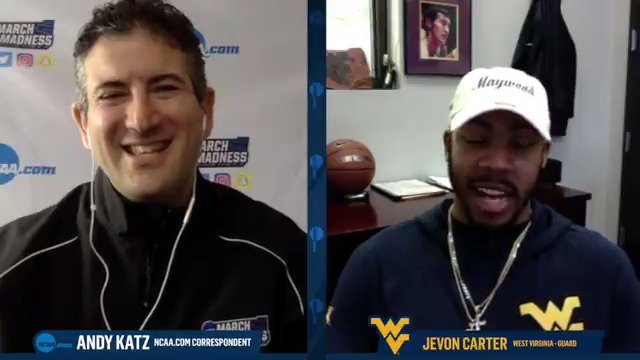 What Is It Like Playing For Bob Huggins? Ask Jevon Carter

What Is It Like Playing For Bob Huggins? Ask Jevon Carter

Jevon Carter is the unquestioned leader of the Mountaineers. That made it very interesting when Andy Katz asked him, “What’s it like playing for Bob Huggins?”

Nothing really surprising comes out of Carter’s mouth. He’s the very humble, hard-working star Mountaineer fans have come to adore over the past four seasons.

Watch the interview: What Is It Like Playing For Bob Huggins?

What is it like playing for Bob Huggins?
West Virginia's Jevon Carter gave @TheAndyKatz a rather unexpected answer… pic.twitter.com/ODIEpy6Qkk

Andy Katz does a great job with the questions he asks the Mountaineer star. It’s cool to see him pick the brain of the perfect Huggins student.

One part that stood out when they said Bob Huggins has became more mellow. It didn’t happen overnight, but Bob Huggins has certainly mellowed out over the years. There have been times this season where Huggins of the past would certainly get a technical.

Carter definitely earned Huggins trust by playing hard and giving 100%. He mentions that in the interview. There is always a player that is an integral part of the rotation and basically never comes out of the game. Unless he is in severe foul trouble, Jevon Carter is on the floor. It’s very unique because most of Huggins’ rotation gets a lot of rest as he rotates players in and out to keep everyone fresh. It’s also a testament to the conditioning of Carter as Huggy knows he is capable of playing 40 minutes with high energy and high effectiveness.

Today Carter leads the Mountaineers into an extremely tough road test against No. 8 Texas Tech. It’s going to take a big day from the the Mountaineer senior to get past the Red Raiders in Lubbock. This is the toughest road game for the Mountaineers to date and a great chance to further establish themselves at the top of the Big 12.