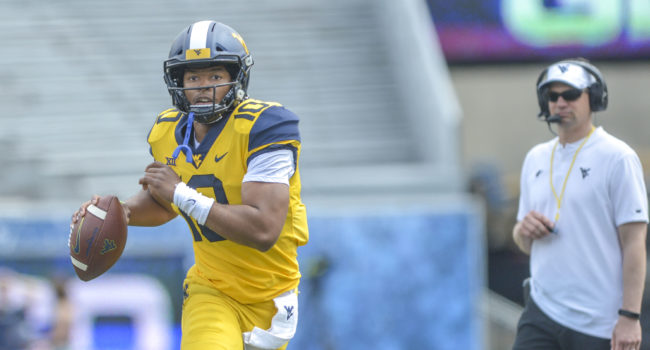 West Virginia Mountaineers Trey Lowe looks to make a pass during the spring game on Saturday.

It seems that all it takes to win over WV nation is to say a few kind words about the state. We have a head coach that refuses to bench one of the worst quarterbacks in the nation, that has our offense near dead last and that has blown multiple games because of clock management and or failed adjustments – yet he gets a free pass because he says West Virginia is a blue collar state, because he sings Country Roads and because he wears Gold and Blue. If this were Dana Holgorsen, we’d be calling for his head to roll. It’s not the wins and losses. I honestly didn’t care if we went winless this year. I knew it was a rebuilding year. The problem is how to #TrustTheClimb when I’ve watched an incompetent QB week after week miss 5 yard crossing patterns and throw a Go Route to a wide open receiver 40 yards into the stands and the coach refuse to replace him.

So why hasn’t Coach Brown benched Austin Kendall yet? Because he recruited the guy out of high school when he was coaching at Kentucky. Because he got the kid to come to WVU over the likes of Auburn. Austin Kendall is his quarterback, Trey Lowe is Dana’s. Dana and Spav (former offensive coordinator Jake Spavital) both said Lowe was a beast and the future of the program. We beat out multiple SEC schools that came in at the last minute to gauge his interest and try to steal him away. Brown has cost us a Bowl this season because of an ego that wouldn’t let him admit Kendall was a mistake and that same ego won’t let him go to “Dana’s” QB: Trey Lowe. If Lowe plays well, he’s entrenched as the starter for the next 3 years and Dana would get the credit for recruiting him, therefore Brown refuses to play him. Lowe will have to transfer because it’s obvious Brown wouldn’t play him even if he were the next Michael Vick. A lot of head coaches think this way but most wouldn’t let getting credit for the qb get in the way of winning games. I really don’t understand where some of our fans act like Brown is Nick Saban Jr. He might get it figured out in a few years but there was no reason we couldn’t have won at least 6-7 games this year if he would’ve dropped the ego and played Lowe. We’re a power 5 Big 12 program loaded with young talent and he has our offense ranked 122 out of 130 and it’s because of the QBs inability to throw more than 2 yards downfield. Completely unacceptable.

And before you say, “who cares about the crappy bowl we would get at 6-6,” let me stop you and say that ANY bowl is extremely important, ESPECIALLY for building a young, inexperienced program. It gives the kids at least an extra month of practice, gives them valuable experience in a nationally televised game and gets our School a little money and recognition with recruits. With the first and last being the entire essence of rebuilding a program.

Some say our offensive line doesn’t give Kendall time to throw, when the fact is we gave up zero sacks to Texas, none to Oklahoma, one to NC State, one to James Madison and one to league leading Baylor and that wasn’t even until the 4th Q. Our QB just went 20-39 against a soft defense and 90% of his passes were under 15 yards. I’ve seen him miss countless 3 yard Half Back swings in one game. Even with an average QB – we would’ve killed Baylor, beat Texas, ISU and won at least 7 games.

There is absolutely NO REASON our offense should be near last in the nation with our talent. And furthermore, no reason we should be 3-5. That’s coaching and QB play. And don’t worry Mountaineer nation, I promise its not blasphemy to call out Neal Brown. He’s a millionaire thats underperforming, in what other business or occupation would Blue Collar, Coal Minin’, Deer huntin’, 4 wheelin’ West Virginians sit back and not hold a millionaire accountable for not doing their job? Don’t be hypocrites, you wouldn’t have accepted 3-5 from Dana Holgorsen.