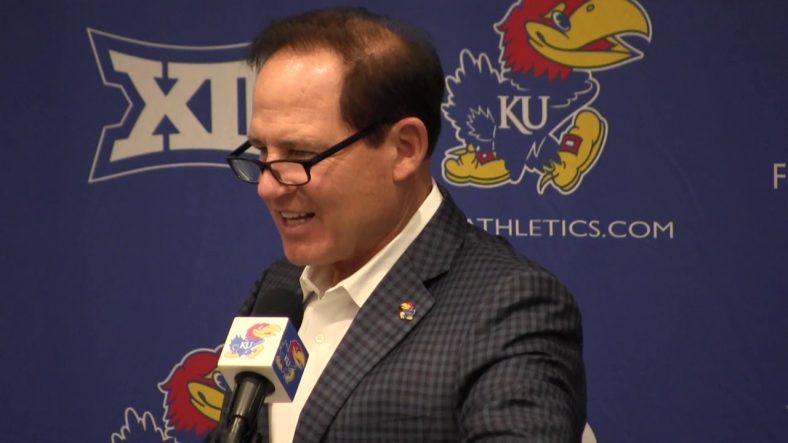 After being out of coaching for two seasons and a large portion of another, Les Miles is back. Also, he didn’t lose his confidence and quirkiness before coming back.

Miles is back and has his hands full with reviving a Kansas University football program that has been a dumpster fire for a long time. When he was contending for the SEC title every season at LSU, it was hard to imagine him being out of coaching two years, followed by taking a job with a perennial basement dweller like Kansas.

That said, Miles is making progress quickly. His Jayhawks won a road game over Boston College last week by a final score of 48 to 24. This was the first road win over a Power 5 team for Kansas in more than a decade.

Up next for Les? The West Virginia Mountaineers. He provided this nutty commentary when asked about the Kansas home crowd for West Virginia.

Kansas is known for packing the house for basketball games, but football? Not so much. The paid attendance for the loss to Coastal Carolina was 33,493. The capacity for David Booth Kansas Memorial Stadium is 50,071. A road win over a Power 5 team for Kansas, combined with a more known opponent definitely gives the Kansas crowd an opportunity to turn up the volume.

Both West Virginia and Kansas are coming off games where they improved greatly compared to their previous game. Before defeating Boston College, Kansas was held to seven points at home and lost to Coastal Caroline by a score of 12 to 7. We all know how WVU’s trip to Missouri went.

Word hasn’t surfaced whether or not Miles likes the grass in Kansas as much as he did in Baton Rouge.

Then there was the time he described how watching tape is like reading books.

Say what you want about “The Mad Hatter” but college football is better to have him back and the Big 12 is more entertaining with him on board.