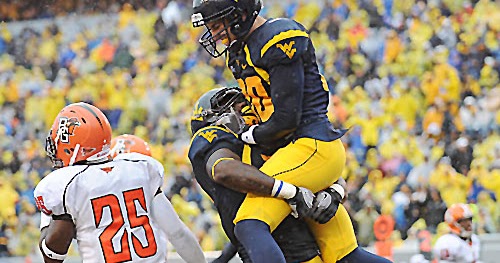 After Saturday’s practice, head football coach Dana Holgorsen addressed the media. He announced that the WVU coaching staff has added Ryan Nehlen as the newest analyst for the Mountaineers.The grandson of former Mountaineer coach is an addition that will make many Mountaineer fans reflect a little.

Holgorsen wasted no time referencing the intelligence Nehlen carried while on the team from 2008 to 2012. He also cracked a joke that though Nehlen was supposed to be a doctor, he has finally embraced the coaching genes he was born into.

“Yeah, it’s a familiar face, familiar last name. He’s a guy by the name of Ryan Nehlen. I thought he was going to be a doctor. He, obviously, comes from a coaching background, but when I coached him for two years, he was this quiet, 4.0 student that played hard when he played. But I always thought he was going to be a doctor and perform surgery on people and stuff like that,” Holgorsen pointed out. “He couldn’t get the coaching thing out of his blood, he’s been a graduate assistant for a couple of years, and he’s a really smart kid. In those analyst positions, it’s critical to have a lot of sense. He has plenty of that, so I’m anxious to see what he brings to the table.”

The Morgantown native was a Mountaineer receiver from 2008 to 2012. Dana Holgorsen is excited about having the young Nehlen as a part of his staff.

“He’ll be performing surgery on our opponents, that’s a great way of putting it. That was the first thing I said. He goes, “Well, what’s the job?” And I said you have to study the opponent and give us as much information as you can,” the West Virginia football coach said. “So, he’s going to do that, but then there’s an analytic side to it as well, as far as self-scouting and doing specific studies. He’s going to be great at that.”

Well now he’s one of the good guys and part of the Mountaineer staff. Many would say this is where he belonged all along.