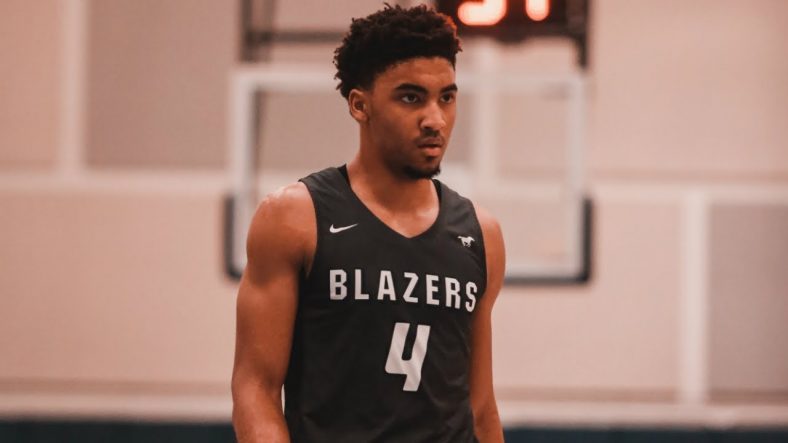 Kenyon Martin, Jr., the son of former Bob Huggins’ player Kenyon Martin, Sr., narrowed his list down to four schools last Wednesday, April 24th.  A week later, we break down the final four schools on his list and the probability that he chooses each.  The 6’6 195 pound power forward from Sierra Canyon High School in Chatsworth, CA, is a 3 star prospect considered to be a “rebounding, blocking, dunking machine” by scouts.  He has not revealed what he’s looking for in a future university or which school is the favorite.

TCU (The Long Shot):  Jamie Dixon, since deciding to remain at TCU, has been busy recruiting and signing transfer players.  Keonte Kennedy, a 6’5 guard from Xavier and Mickey Pearson, a 6’7 forward who originally committed to Saint Louis University, both signed with the Horned Frogs last month.  TCU guard Desmond Bane has entered his name in the NBA Draft but could return and Dixon already has a nice class with PJ Fuller (4 star), Diante Smith (3 star) and Francisco Farabello (4 star).  Martin, Jr. does not appear to have any real ties to TCU or Dixon and the roster is already nearly full.  Martin, Jr. to the Horned Frogs is a major longshot.  10-1

UCLA (The Hometown Pick):  Chatsworth, CA is approximately 20 miles from UCLA’s campus.  If he wants to stay home, he will be a Bruin.  In addition, Mick Cronin, the new head coach, is the former head coach at Cincinnati.  Kenyon Martin, Sr. and Cronin have a relationship and this combined with the proximity to his home could lure Martin, Jr. to Westwood.  5-1

Vanderbilt (The Friendship Pick):  Jerry Stackhouse takes over as the head coach of the Commodores this year and his best friend Scotty Pippen. also of Sierra Canyon High School and the son of former NBA great Scottie Pippen, recently committed there.  Vanderbilt’s recruiting has really picked up since Stackhouse has taken over, adding 3 star recruit Jordan Wright and keeping the commitment of Dylan Disu, in addition to Pippen.  Vanderbilt would also likely provide Martin, Jr. with the most immediate playing time as a Freshman.  3-1

West Virginia (The Bob Huggins Pick):  Kenyon Martin, Sr. loves Bob Huggins.  When asked who his best coach was, Martin will not hesitate in answering “Bob Huggins.”  Martin, Jr. has only ever visited one school on an official visit and that’s WVU.  Martin, Sr. knows that his son would be getting the very best as his coach in Bob Huggins.  However, concerns about Huggins’ longevity as coach could be a concern here.  Can Huggins really look his former player in the eyes and tell him that he’ll for certain be the head coach at WVU for another 4 years?  Still, this feels like a WVU slam dunk pick.  2-1